UK transport operator Go-Ahead has launched a bus with a rooftop filter that removes air pollution as it travels.

Go-Ahead, which runs buses in a number of regions outside the capital, launched the air-filtering vehicle yesterday in the southern English city of Southampton.

The prototype bus is fitted with a filtration system designed by Pall Aerospace for use in planes and marine vessels.

Buses can be "solution to the air quality problem"

The barrier-type filtration system, on the bus's roof, removes particulate pollution from the surrounding air and traps it. At the same time, it blows clean air behind the bus as it drives.

"We want this pilot to show that buses should be looked at as not just the solution to congestion in cities, but also as a solution to the air quality problem," said Go-Ahead chief executive David Brown. 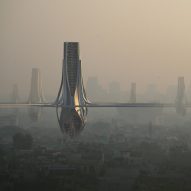 "As the bus removes the ultrafine particles from the air as it travels along the route, it is helping solve the air-quality problems of the city," he continued. "This bus will clean the air on its route 1.7 times a year to a height of 10 metres — imagine the change we could make to air quality if all buses had this technology."

Filter will have no impact on the passenger experience

Go-Ahead chose to launch the prototype in Southampton because it is one of the UK's worst cities for air pollution, according to figures from the World Health Organisation (WHO).

The company said the filter will have no impact on the passenger or travel experience. 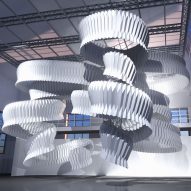 Filtration systems have recently been proposed for high-rise buildings by architecture studio Znera, built into towers and bikes by Daan Roosegaarde, and hung as a fabric installation by Kengo Kuma.

The bus is part of the effort to tackle ballooning air pollution levels around the world. The WHO considers air pollution to be the world's largest single environmental health risk, linked to one in eight total global deaths — some 7 million people — in 2012.