Dutch design studios BCXSY and Atelier Robotiq have collaborated to create a lamp with a disorderly pattern that is meant to suggest that it was made by a robot with a mind of its own.

The Out of Order light has a cylindrical body made of a delicate-looking web of fibres. It was produced by an industrial robot, repurposed from the factory floor and programmed to spin resin-reinforced yarn around a mandrel.

With robots playing an increasing role in architecture and design, BCXSY and Atelier Robotiq set out to explore a different side to this usually "flawless worker".

Rather than having the robot lay down the fibres in an even pattern, they wanted the machine to work more erratically, as if distracted.

"Robots are considered as a perfect match to the complex, high-precision movement requirements within industrial winding techniques," said BCXSY founders Boaz Cohen and Sayaka Yamamoto. "They are reliable, always available and can repeat the same accurate gestures over and over again."

"But what would happen once the flawless worker becomes less impeccable? What if it would grow tired of its daily routine, or becomes absent-minded while daydreaming?"

With this thought experiment in mind, they disrupted the robot's programming with tweaks at various points. These meant that as the robot arm moved up and down the mandrel, its motion became more and more irregular. 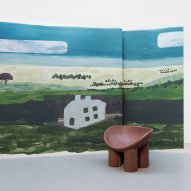 The result is a lampshade with patterning that appears uniform in some places and chaotic in others. Inside the shade is a single LED light rod.

"The unpredictable interwoven patterns may give the impression that the robot has developed a mind of its own," said Cohen and Yamamoto. "They generate a fascinating optical illusion of distortion and make each and every lamp created truly unique."

With only thin wires connecting the fixture to the ceiling, Out of Order gives the impression of "a three-dimensional line work suspended in space", according to the designers.

The fixture is based on the earlier designs of Rotterdam-based Atelier Robotiq, whose Fiber Pattern Lamps all use robotic weaving.

Atelier Robotiq and BCXSY first showed Out of Order at Milan Design Week in 2017 but have since developed the project further and will next show it at Eindhoven design institution Kazerne.

BCXSY is the Amsterdam-based interdisciplinary studio of Israeli designer Boaz Cohen and Japanese designer Sayaka Yamamoto. Among its recent projects is a soap bubble-inspired wallpaper design for Calico and the Mixed Animals soft toys with interchangeable magnetic parts.

Photography is by Marta Musial.