An architect's tool of choice for visualising designs is not important, says Aaron Betsky, as long as the effects of time and use on the finished creations are considered during the process.

Who cares whether you use a pen, a pencil, or a stylus? Quite a lot of people. Over the last few years, I have endured countless jeremiads, especially from more conservative architects and critics, about how the use of computers to represent proposed buildings is fundamentally changing the very discipline.

Baloney. The computer is just another tool and, for all the moaning about the disappearance of hand-eye coordination and a sense of expression that supposedly comes with the charcoal smudges of an HB lead, I have seen no change in the way the mode of rendering is changing either the profession or the theory of design in a fundamental manner.

It is absolutely true that computer and communication technologies have altered the way buildings appear, for the simple reason that advances in everything from engineering calculations to the ability to fabricate compound curves has let architects be more flexible and expressive in their designs.

Is that change fundamental? No, it is a difference in both scale, as the experiments of Mendelsohn that were not much bigger than the metaphorical breadbox can now be skyscrapers in Singapore or Beijing, and in build-ability, as the cantilevered forms the constructivists dreamed up can now – up to a point, as in Jenga Towers – be realised.

It is no doubt true that tools make the man and the woman, and that we look at things differently because of how we draw and model our world. Yet as long as we are still in control, we are still homo faber, making our reality.

The computer is just another tool

What the computer has not altered is the sense that we can make a different, human-formed world, and that its contours arise out of, respond to, and in turn change our activities, our bodies, and our communities.

It is also no doubt true, as Es Devlin commented recently in an interview on this site, that such renderings don't necessarily "communicate anything that is manmade". The nitty-gritty of dirt and mismatched detailing show up in reality, not (yet) in computer renderings.

This site's founder, Marcus Fairs, instagrammed the disjunction between the rendering of the ultimate Jenga Tower, 56 Leonard Street, and its reality of cheap window packages, and – in what became an internet meme – it was obvious at Burning Man that the desert dust transformed what Bjarke Ingels promised would be a reflective globe into an opaque ball.

That is not, however, because renderers are unable to show such a reality, it is that they chose not to or – as Devlin pointed out – it is still too difficult for them to do so. If you want to see real dirt reproduced, check in with the Madrid-based firm Factum Arte, which has copied the dirt in Tutankhamun's tomb. They did that exercise to produce a faithful facsimile.

Renderers in architecture, however, are just doing what they always have done: promising a future, selling a product, a promoting a vision of what the world could be if only they or their clients were able to design it down to the coffee mugs Devlin thinks should be left to be drawn by hand.

This is problematic from another perspective. As Sean Griffiths recently pointed out, also on this site, such images "are themselves nothing but consolatory fictions, often used for nefarious ends". Griffiths then goes on to point out that such lying architecture goes back to at least the age of classical revival. It is not the result of new techniques.

He sees the fault not with the computer, but with style: modernism, he claims, "to do away with all this sort of thing" by relying on abstraction, not metaphor; and realism, not fantasy.

That seems like an outdated notion of modernism, as generations of scholars have by now mined Le Corbusier for Palladio and Mies van der Rohe for meaning in even the most abstract of those modern masters' details. The problem is not with an attempt to give meaning to buildings, but with the fact that architecture is in itself an attempt to give signification to the act or fact of building. 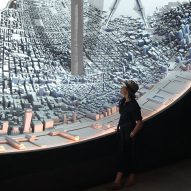 Architecture is the fiction, the representation, the promise, the meta-building of building. It is there that the problem of representation as being by its very nature separate from reality sets in.

Except that this might not be a problem, was it not for the fact that the building is a product that has to be sold, and that is what architects have to do to get their structures constructed. That means that they have to show what they imagine and hope will exist, not what they fear might be the result.

Architects have to show what they imagine and hope will exist, not what they fear might be the result

For centuries, clients and critics alike have found themselves disappointed with the difference between the sales document and the product (even though they often were complicit with the dumbing down of the building for cost purposes). A building is (almost) never as good as it was in the rendering.

It is for that reason that the best renderings are not the promissory notes for constructions, but the utopian, narrative, or experimental drawings that show us possible worlds, fairytales, or alternate versions of our all-too-constrained reality.

If anything, I would argue for subjecting buildings more to renderings: if the building could be a three-dimensional, inhabitable version of what we might want to experience, would they not be better than attempts to live up to airbrushed worlds of rendering factories?

This kind of Photoshop architecture might be possible: MVRDV has gone furthest in this direction with such structures as its Glass Farm in Schijndel (main image) and its store for Chanel in Amsterdam.

Even here, however, there remains the gap between representation and reality. It is exactly because the computer cannot bridge that chasm of lived and continually changing experience that it makes no fundamental difference whether you draw with a pen or a stylus, in a sketchbook or an iPad, and with Rhino or a Pelikan.

My students know that. Having grown up with computers, pads, and every other form of communication, they treat them indistinguishably, switching back and forth between pen, pencil, mouse, and 3D printer at will.

That does create problems. I have noted a lack of exploration of sequence and the relationship between spaces, both inside and outside (what we used to call "section") and a heightening of the tendency of all architects to take the god's eye view – except now the metaphorical deity has been replaced by a notional drone.

What is of importance, in other words, is to keep emphasising the continuity of space and time, as we experience it and represent it, even in a world where we know such a notion is fictional, because it is the lie we tell ourselves to be human. We need to render humanly, we need to render humanity, with whatever tools we have at our disposal.