Carpenters Workshop Gallery has set up its fourth permanent location, taking over part of an arts venue inside a former church on the US West Coast.

The San Francisco branch of the gallery occupies a 9,000-square-foot (836-square-metre) mezzanine at Saint Joseph's Arts Society – a national historic monument built in 1913.

The ornate Romanesque Revival building has been restored by its owner, New York architect and designer Ken Fulk, over the past three years. It now serves as a creative incubator, intended to promote emerging and established artists from around the world.

White surfaces and decorative metallic flourishes throughout the space provide a backdrop for Carpenters' range of experimental collectable design.

A rapidly growing client base in the US, sparked by the opening of a New York gallery in 2015, provoked founders Julien Lombrail and Loic Le Gaillard to look to a second American city for expansion.

"The founders had been visiting and following San Francisco's rich cultural scene and vibrant design landscape, for many years," said a statement from Carpenters Workshop Gallery.

"The fact that this is also supported by an active and engaged collector base, made the city a clear choice."

The outpost opened to the public 1 October 2018 with an exhibition that brings together some of the gallery's longstanding collaborators. 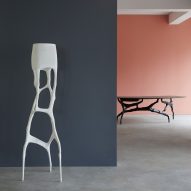 Carpenters plans to hold biannual exhibitions at the space dedicated to a single artist or designer, along with rotating group shows.

Lombrail and Le Gaillard opened their first Carpenters Workshop Gallery space in London's Chelsea in 2006, before moving to Mayfair in 2008. Another gallery in Le Marais area of Paris followed in 2011, then the location on New York's Fifth Avenue four years later.

Recent exhibitions across these outposts have included solo showcases of de Cotiis' fibreglass and metal furniture in London and New York, and a presentation of skeletal-looking furniture and monolithic marble benches by Charles Trevelyan also in the Big Apple.