New York-based artist Tom Sachs has released an updated version of his Nike Mars Yard trainers, which look like the lunar overshoes worn by astronauts.

The newest edition of the trainer, the Nike Mars Yard Overshoe, features a nylon-reinforced dyneema – a dense polyethylene – overcoat stitched onto a previous iteration of the shoe, with a knitted collar on the inside. It can be worn rolled up or down depending on the weather conditions.

"Dyneema is super-strong and they use it for boat sails so it is impervious to weather. You can also roll down the bag when you are inside in heated spaces so your foot can breathe," Sachs told Dezeen.

"We designed it [the original Nike Mars Yard trainer] to be light and breathable but the other side of that coin is that the second there is a drop of rain your feet are wet and cold and it is miserable," he explained.

The designer quipped that the shoe would be suitable for a wet March, which he describes as the "worst month of the year". "It is wet, your feet are wet the whole month of March," said Sachs.

With accents of light blue, white, cream, black and red, the trainer is fixed with chunky buckles and thick white nylon straps. The brighter colour palette and extra hardware better resemble the footwear worn by astronauts in space.

When the overcoat is pulled upwards, it can be secured using a toggle and magnetic straps that fastens the material in place around the leg. 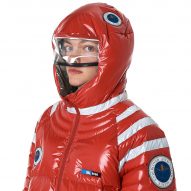 Alternatively, when rolled down, the trainer reveals a cream-coloured tongue with a bright red donning strap, a loop of material on the tongue used to help the wearer put the shoe on.

Sachs initially designed the shoe for a mechanical engineer at NASA's Jet Propulsion Lab, which created the airbags used in the Mars Exploration Rover missions.

The shoe was later updated in 2017 to include a polyester meshing, instead of the previous Vectran, a material used to make these airbags.

The Nike Mars Yard Overshoe was available in limited numbers from Dover Street Market via an online raffle. To coincide with the release of the shoe, Sachs has made a short film featuring the shoe, called Paradox Bullets, narrated by Werner Herzog.

Sachs is not the only designer who has looked to space for design inspiration. Earlier this year, fashion designer Heron Preston teamed up with NASA to launch a collection of streetwear clothing, which takes cues from 60-years of visual history at the space agency.

Elsewhere, Jun Takahashi's cult fashion label Undercover has released a down jacket with a hood based on an astronaut's helmet.