Architecture firm Grimshaw's station that will connect Los Angeles International Airport to the city's light rail network is shown in these new renderings.

Scheduled to open in 2023, the $500 million (£390 million) Airport Metro Connector (AMC) transit hub will connect LAX to the public transport system, as part of the car-centric city's wider transit improvements.

"The Airport Metro Connector will play a vital role in reducing dependence on the private vehicle to access the often-congested LAX airport," said Grimshaw principal Andrew Byrne in a statement.

The global architecture studio is acting as the project's lead design architect, with local firm Gruen Associates as architect of record.

The AMC will link the Metro system's Crenshaw/LAX Line, which is currently under construction across the southwest of the city, with the extended Green Line.

The station will eventually connect to an elevated electric Automated People Mover (AMP) operated by the airport, which will shuttle passengers to and from the terminals.

Currently, a free shuttle bus is provided between LAX and the Green Line's Aviation LAX station.

Byrne believes the station will be a "transformative addition to LA's mobility landscape that will make it easier to arrive and depart the airport, and to navigate the surrounding neighbourhoods, no matter what your mode of transit".

Bicycle parking, a bus plaza and a vehicle drop-off are also planned for the 9.5-acre (3.8-hectare) AMC site, located at the corner of Arbor Vitae Street and Aviation Boulevard.

Recently updated renderings show white and glass buildings filled with natural light inside. Wide concourses will be located above ground, providing access to the various transit options on different levels. 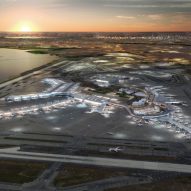 "The AMC is uniquely designed to include elegant skylights, swooping canopies, and glazed screens creating a lightweight spacious environment for travellers to connect easily to where they need to go," said Grimshaw's statement.

Landscaping will surround the site, and form a public space between canopies that extend from the main buildings to form shelters beside bus parking.

Solar panels also appear in the images, hinting that they will be used to help power the transit hub.

Grimshaw has plenty of experience designing stations and transport infrastructure. The firm recently completed the overhaul of London Bridge railway station, and a metro stop in Toronto.

It is also currently working on ambitious plans for New York's JFK and Newark airports, as well as the HS2 stations in the UK.

Images are by Grimshaw Architects. Video is by Kilograph and Grimshaw.