Pratt Institute graduate Jae-Hyun An has created a prosthetic leg that allows amputees to perform ballet like never before.

Unlike regular artificial limbs, which are designed to mimic the human body, the Marie-T enables amputee ballet dancers to enhance their performance.

Made up of three components, Marie-T features a weighty foam-injected rotational moulded foot, with a stainless-steel toe and rubber grip that help provide the dancer with balance and momentum during rotations.

In mainstream ballet, dancers typically move in and out of the pointe position – when all body weight is supported by the tips of fully extended feet within pointe shoes.

However, because of the immense strain on the foot and ankle of a performer, it is impossible for a ballet dancer to constantly perform in this position.

Jae-Hyun An, who studied on the Pratt's Industrial Design programme, designed the carbon-fibre Marie-T to enable amputees to dance on pointe throughout a performance.

New York-based An said the design, which is named after 19th-century Swedish ballet dancer Marie Taglioni, could encourage amputees to develop a new choreography that has never been achieved by mainstream ballerinas.

"I wanted to explore what would happen if you could allow a person to perform on pointe 100 per cent of the time," said An, who developed Marie-T over the course of four months.

"How would ballet change? I wanted to create a tool for someone to take and let their imagination define the capabilities of the product."

During research, An realised that a weak ankle can twist and cause a ballerina in pointe position to wobble. In response, An designed a strong and stable ankle area that helps the ballerina stay in balance.

The ankle connects to a slightly curved carbon-fibre limb which helps absorb the shock from the impact of the ballet dancer stepping forward. The limb is topped by a 3D-printed socket with steel round head screws. 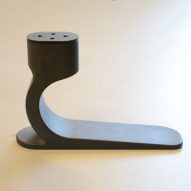 Ill-fitting prosthetic limbs can cause blisters and rashes on dancers, so An designed the Marie-T so that the parts can be easily switched out when they become well worn or need to be resized.

The designer told Dezeen: "Prosthetics by itself is such a powerful and inspirational design. Any form of it is really amazing! Whether it is Hugh Herr's bionic legs from the Biomechatronics Group in MIT, or the Flex-Foot Cheetah Leg from Ossur, or even a peg leg from... whenever."

"It is inspiring because the technology is incredible but even more so because of the immense struggle an amputee has to overcome to use these products. Some argue that some of these prostheses give amputees a certain advantage in specific tasks, but I am not sure they would say the same if they ever saw how much training and care it takes to handle a prosthesis," he continued.

"In my research I came across Viktoria Modesta and she re-interpreted performance with her prosthetics. It was visually so powerful and opened a completely new area of prosthetics for me. I fell in love with the idea of designing something that could expand the artistic and cultural scene of a community with prosthetic users."

To continue developing this project in the future, An hopes to collaborate with an amputee dancer who has their own vision for prosthetic ballet.

"The design of the prosthesis will change to fit the dancer, but also to match the specific movements of the newly developed choreography," he explained. "However, until I meet this dancer, I will continue to develop as a designer."

Other developments in prosthetics this year have included a newly developed electronic skin that is able to mimic the function and properties of human skin. Scientists believe that the skin could help to create prosthetics capable of providing sensory feedback. 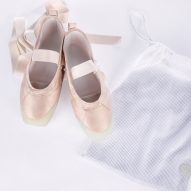 Meanwhile engineers from MIT have developed a streamlined prosthetic foot that lets wearers walk with a fluid motion, and can be manufactured at a low cost.