When the wearer wants to control the hand, their brain sends impulses to specific muscles to activate them.

Over 30 non-invasive sensors that connect the stump socket to the wearer's skin pick up on this muscle activity or "electrical cues" and relay the information to trigger an action in the hand.

BCIs are often used by paralysis patients to control machines with just their thoughts. Dima Gazda, co-founder of Esper Bionics claims that the arm is three times faster than many of the prosthetics currently available on the market.

"We sought to create a light and durable hand with human-like dexterity that learns over time and can help people with limb differences live their best lives confidently," Gazda told Dezeen.

"Inspired by the beauty of the human body and the lightness and durability of aviation technology, the self-learning robotic hand embodies elegance, functionality and endurance," she said.

"Esper Hand is three times faster in control than other hand prostheses available in the market."

Esper Hand has five movable digits and can rotate and grip in multiple ways, allowing the wearer to perform everyday tasks such as opening a bottle, driving a car, using kitchen utensils or tapping a phone screen.

The 380-gram arm is made from a combination of polyoxymethylene plastic, fluoroplastics, nylon, aluminium, steel, titan, bronze and three types different types of silicone. It comes in four sizes and five colours.

To create the arm, Esper Bionics employed electromechanics, a field of engineering that merges electrical and mechanical engineering to make sure the hand can "perform all the necessary functions".

This included conducting durability tests on 3D-printed versions of the hand and adjusting its shape and size. 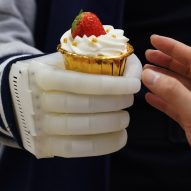 "We create the design of the future hand making sure that it's as human-like as possible," said Gazda.

"We go through a series of iterations to eliminate engineering and design mistakes and choose the right materials for the final version of the product."

According to the company, the resulting arm is "lighter than a human hand" and at 380 grams, it is lighter than many limb prosthetics on the market.

The flexible hand has modular fingers that can form multiple common grasps including flexing, pinching fingers together, cupping and making a fist.

It also has a "special mechanism" that allows the wearer to easily disconnect the hand which can be useful for example when the wearer is changing clothes.

Esper Bionics also created a cloud-based platform that can be connected to the arm to help improve its performance over time.

Dubbed Esper Platform, the solution can be connected to the wearer's smartphone or laptop. It collects and stores data about the user's movements, effectively "learning" what the wearer's next action will be so that it can predict movements faster.

"Thanks to all the collected data, the platform updates the control algorithms of the hand so that next time the preferred grip will have a higher priority to be chosen in the same situation," explained Gazda.

"The hand perceives a certain situation to be 'the same' if it receives similar data to what it received before from all the sensors," she said.

"Ultimately, the more the wearer uses the hand, the faster it suggests the right grip."

Gazda believes that the technology used for Esper Hand can help improve the quality of amputees' lives.

"We see assistive devices as the foundation for the future ecosystem of electronic implants which we believe have the biggest potential in unleashing human abilities, eliminating diseases and prolonging lives," she said.

Other recent prosthetics featured on Dezeen include a prosthetic leg for amputee ballet dancers by Jae-Hyun An and an exoskeleton that paralysed individuals can control with their mind creaed by researchers at Grenoble university.

The photography is courtesy of Esper Bionics.