Design student Lorenzo Spreafico has invented a prosthetic arm that could bring tactile feedback to people who can't currently afford it.

Spreafico designed the T1 prosthesis as his final year project in the Product Design bachelors at the University of Leeds in the UK.

The 3D-printed plastic arm incorporates vibro-tactile feedback, relaying information about how firmly a person is gripping or touching an object via vibrations to their skin.

Spreafico was motivated to design the product after noticing that little progress had been made in bringing the experience of touch to prostheses.

"I realised there was a huge gap in prosthetics development: although we are making extremely advanced technology to simulate human movement and dexterity, there is much less work being done when it comes to simulating human touch," he told Dezeen.

The touch-based technologies he observed were either nonviable for commercial use or were destined to be prohibitively expensive.

"Even when this technology will decrease in price and be more affordable for users, it's still very likely to be part of a final product which costs from £30,000 to £100,000, if not more (which are the current prices of most prosthetic limbs)," he continued.

"That's when I got the idea for T1: I wanted to realise a functional prosthetic arm, develop a simple tactile feedback system to be implemented into it, and make the whole product extremely affordable."

The estimated retail price for the T1 is £3,000, which Spreafico said would make it one of the most affordable myoelectric prosthetic arms available. 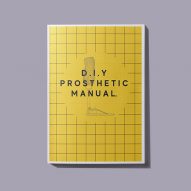 He chose to focus on pressure simulation in order to keep the device low-cost. In reality, he said, the somatosensory system is incredibly complex and can detect changes in temperature, shear, humidity, texture and more, and trying to replicate all of these dimensions would soon lead to a much more expensive device.

The T1 is relatively simple. Pressure sensors on the fingertips connect to vibrating disc motors in the wearer's stump to alert them to the level of force they're applying to an object.

The user can regulate the level of vibration they experience via a knob, or turn the feature off completely if they're in a situation where they want to avoid constant buzzing. They can select from three grip modes – open hand, pinch grip or precision grip.

And because the brain is so plastic, it soon learns to interpret the vibration adeptly, especially because Spreafico honed the prototype to make sure the pressure sensing and feedback are perfectly in sync.

Although the design student only had time for limited user testing of the final prototype within the scope of his university project, he met with initially positive reactions and hopes to continue to develop T1.

He believes that the inclusion of even this basic level of tactile feedback could be transformative for lower-arm amputees.

"The lack of tactile feedback in prosthetic arms creates an extremely unrealistic user experience," he said. "It reduces accuracy in the control of movement and grip, making it harder for users to perform delicate actions with precision, and making it harder to adapt their grip strength to different activities."

"Moreover, its lack reduces proprioception (the sense of self-movement and body position), and lowers the feeling of embodiment of the prosthetic arm. All of these aspects are the reasons why the lack of tactile feedback is one of the main factors that make rejection rates of upper limb prosthetic arms so high." 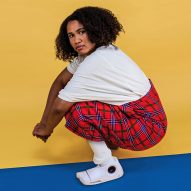 Another factor keeping the cost of T1 low is manufacture. Spreafico designed the arm as one single component so it comes out of the 3D printer fully assembled.

Spreafico is now studying for his Masters in the Innovation Design Engineering programme at the Royal College of Art and Imperial College in London.

Another recent student-designed prosthetic device came from Desiree Riny, whose ultra-low-cost DIY system is intended for people who live without access to professional care.