A fictional meeting between Finnish architect Alvar Aalto and American ceramicist Edith Heath formed the basis of a collaboration that combines their designs, displayed in an installation by LA studio The Archers.

Both figures are no longer with us, so the current leaders of the two brands had to imagine the outcome of a creative union between them.

The result is a series of limited-edition products, which includes versions of Artek's bent wood Stool 60 and Tea Trolley 900, reinterpreted with colourful glazes created by the Heath Clay Studio based on archive designs.

The tea trolley, first issued in 1937, is topped with custom tiles – six options were each produced as a run of six.

The stools are also available with a bespoke silkscreen surface pattern, or as a set of three with their legs incrementally shortened so they stack perfectly on top of one another.

To launch the Artek x Heath collection in New York, the companies turned to The Archers to create an installation at the Meatpacking District showroom of Artek's parent company Vitra. 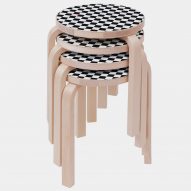 The Archers envisioned a scenario in which Alvar Aalto and Edith Heath met during MoMA's Good Design exhibition in 1950, which featured work by both designers.

After deciding to collaborate, the pair formally discuss the project years later in a hotel conference room. This setting is produced in the Vitra space, where pale curtains cover the walls around a long glass-topped table.

"The two designers never met in person, despite their overlapping interests in expressing the modern through natural materials and handcraft, and their respective successes in the mid-century design world," said The Archers' project description.

"We have staged a hypothetical design summit as the outcome of their imagined meetings and correspondence."

Frozen in time as if mid-meeting, except without the participants, the detailed Take Five installation includes notepads and sketches strewn across the table between lipstick-marked crockery.

At one end of the room, a presentation space includes a chalkboard filled with design ideas. At the other, a lounge area displays the trolleys alongside discarded cigarette butts.

Several Artek products are subtly used throughout the room, including Aalto's designs for vases, pendant lamps and textile patterns.

"If Edith Heath and Alvar Aalto had ever met in person, something truly powerful could have developed," said Artek managing director Marianne Goebl. "The Archers' installation brings to life the setting of Edith's and Alvar's possible encounter, unveiling what happened, when Artek and Heath actually collaborated this year."

The installation remains on show at Vitra, 100 Gansevoort Street, until 30 November 2018.

Installation photography is by Eric Petschek.