Architect Jack Hudspith and product designer Ben Pawle have created a cycling glove with a smiley face on each side, to encourage road users to communicate with each other better.

On the back of each glove is a reflective face, for increased visibility day and night, while a cushioned smiley face covers the palm.

It is hoped that waving a glove with a smiley face will help solve flare-ups of road rage, which the designers describe as "an incredibly complex issue with no easy solutions."

Called Glove, the product is launched under the brand name Loffi, set up by Hudspith and Pawle after they graduated from Glasgow School of Art.

The cycling gloves are designed to be worn year-round, and are water-repellant, windproof and warm, but also breathable.

The palms of the glove are made from a double layer of polyester-fibre AX suede, which is good for grip, with touchscreen fabric on each finger so that the wearer doesn't need to remove them to check their phone en route.

The intention is that cyclists can simply raise their palm or wave to other traffic on the road, to signal thanks, in the hope that increasing positive non-verbal communication will ease tensions between road users.

Hudpsith described the glove as "a direct response to the increasing anger and animosity we all face whilst cycling" and suggested that the issue of road rage "seems particularly topical at the moment".

"Road rage is rocketing. Cyclists blame drivers and drivers blame cyclists. It's a high-quality cycling glove with a mission. We want to ease these tensions, with actions not words," he said. 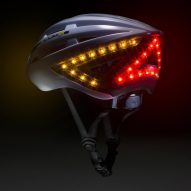 The founders of Loffi spent a year testing a prototype of the product on their commute and when cycling abroad, and met with an overwhelmingly positive reaction.

"Just like a smile, waving shows mutual respect," said Hudspith, who commutes by bike and has been cycling in London since childhood. "Glove makes waving more meaningful. It's polite, good-humoured and spreads genuine goodwill."

Hudspith and Pawle started developing Glove two years ago. They had noticed an increase in aggression on the roads from both cyclists and drivers, with a rise in the number of unpleasant incidents and even assaults recorded.

With their commutes becoming more stressful, the pair decided that something must be done to make roads safer and happier.

"We were both being confronted with negative interactions so often while cycling and had begun setting off on our bikes anticipating an incident," said Hudspith.

As cyclists, it made sense for them to approach the problem by attempting to bring about change in cyclists' behaviour, starting in London where they both live.

"Our roads were not designed for cyclists, and because cycling has grown in popularity so quickly the infrastructure hasn't been able to keep up, so naturally there is competition for space," said Hudspith.

"This rapid increase in popularity means our general cyclist and driver culture has a lot of catching up to do, unlike some other cities in Europe."

The pair describe Glove as a starting point to changing behaviour and ultimately, the experience of cycling in the city. It will be sold on their website and at various independent bike stores from early December.

They are not the only designers tackling the topic. Last year a pair of engineers designed Lumos, a bike helmet with embedded lights that indicate to other road users when the cyclist is braking or turning a corner, in a bid to make both cyclists and drivers feel more comfortable sharing the road.