Installed on a 20- by 60-metre plot of agricultural land next to the cemetery, Six Vaults Pavilion was installed to mark the centennial commemoration of the end of the first world war earlier this year.

The German Military Cemetery dates from 1917, when the area was in still in German hands, and is the resting place of more than eight thousand German soldiers who were killed in the region during the war.

Today, the cemetery is located in a typical Flemish suburban context, surrounded by agricultural lands and traditional allotments.

The six archways of Gijs Van Vaerenbergh's new pavilion have varying shapes and dimensions, carefully angled to frame different parts of this landscape. Plus an over-dimensioned column accommodates an integrated lavatory.

During the design process the architects started with a cube shape and cut away the voids. The resulting shape was then recreated at a large scale in poured concrete.

"Six diagonal vaults were cut out of a massive volume of nine by nine by five metres at different angles. This creates a covered space, defined by a complex vault and columns structure of varying shapes and dimensions," he continued.

"The result is a kind of viewing machine that brings both itself and the environment to the fore."

In addition to framing the outward-looking views, the architects wanted the pavilion to be an artwork in itself.

"Depending on the viewing direction, the pavilion also frames fragments of itself," they explained.

"This creates a pictorial play of arc in arc that brings to the fore the way the play of light affects the vaults. As such, the pavilion functions as a kind of viewing machine that brings both itself and the environment to the fore."

Other examples including the industrial-looking maze that the duo created at a former coal mine in Genk. There, shapes including spheres, cylinders and cones were cut out from the box-like structure's walls, forming larger open spaces within the maze and gaps in the vertical surfaces. 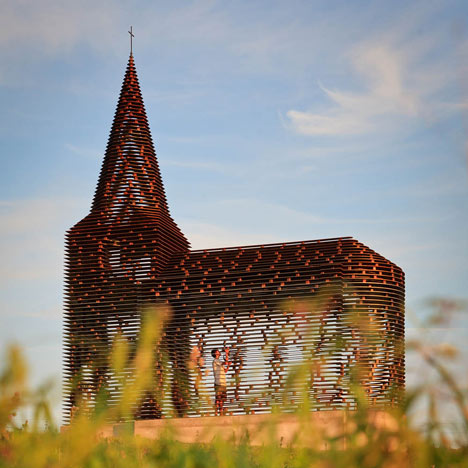 Reading between the Lines by Gijs Van Vaerenbergh

In Hooglede, the dark concrete floor in and around the pavilion features a fracture pattern that divides it up into sections.

The fracture pattern was formed by removing concrete fragments at strategic locations to make space for greenery and planting. The aim was to reference the broken and blackened landscape at the time of the war.

"The floor as such functions both as a paved square for parking and a park with lush greenery that connects with the green cemetery," said the architects, who collaborated with landscape studio LAMA to design the pavilion's setting.

In addition to the pavilion in Hooglede, the municipality also commissioned a new reception infrastructure for the cemetery with a parking zone, a bicycle shed, a covered reception area and a public toilet.