Artist Joep van Lieshout explains how he "likes to get dirty" by taking a hands-on approach to designing furniture, such as his Liberty Lounger chair for Moooi, in our latest Design Dreams movie for the Dutch brand.

Van Lieshout, who describes himself as an "artist, designer, architect and developer", runs his studio Atelier Van Lieshout from a former warehouse in the docks of Rotterdam in the Netherlands.

The studio produces a wide range of work, from large-scale art installations and sculptures, to individual products, such as the Liberty Lounger chair and Statistocrat lamp for design brand Moooi.

"I really like to work in the workshop, to get dirty," Van Lieshout said in the movie, which Dezeen filmed for Moooi in Rotterdam. "I think it's very important to connect the eye and the hands to create a product."

"Normally, I work for a couple years on a certain project, which is a kind of parallel utopian world with dystopian aspects to it," he explained.

"And for these imaginary societies I create the systems, I create the architecture, I create the furniture. Many of the pieces for Moooi that we designed come from these larger art projects."

The product originated from a series of artworks titled New Tribal Labyrinth, in which Van Lieshout "tried to re-invent the industrial revolution" by imagining a future society where everyone is involved in the process of production.

As part of the project, Van Lieshout built a treadmill-powered sawmill and created a range of furniture pieces made from the lumber he imagined the sawmill would produce.

"I made 50 or so prototypes of furniture," Van Lieshout explained. "My conceptual parameter was [each piece] had to be finished in one day. One of them was the Liberty Lounger, which Marcel Wanders, the founder of Moooi, saw and he said: 'This is a great chair, we should produce it'."

Van Lieshout worked with Moooi to very quickly turn the prototype into a commercial product.

The final version is made from smooth American walnut, in contrast to the rough painted timber of Van Lieshout's prototype. 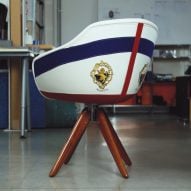 "Together with Moooi we came to the final version, which combines very nice wood and quality craft with the original design," Van Lieshout said.

"I really love working with Marcel [Wanders] because he is crazy enough to make renegade decisions. I don't like very long processes. A piece of furniture should come from the heart and then you smash it into the world."

Atelier Van Lieshout's previous product for Moooi is a floor lamp called Statistocrat. Unveiled by Moooi in Milan in April 2015, the light features a series of cylindrical metal lampshades, which branch off from a central pole.

The lamp comes from a project called Slave City, a series of artworks through which van Lieshout imagined a self-sustaining, zero-carbon prison city powered by 200,000 slaves.

"I combined the most horrible scenario with the most green and utopian scenario," Van Lieshout said.

The form of the lamp is based on charts and diagrams Van Lieshout produced visualising the data and statistics from his imaginary city.

"The Statistocrat lamp was inspired by the diet of the slaves," he explained. "I translated those quantities into charts."

Like the Liberty Lounger, the Moooi product is based on a prototype Van Lieshout and his team welded together in their Rotterdam studio. Van Lieshout says it was important to him that the final, industrially-produced version retained the hand-made aesthetic of his prototype.

"It's really still rough, you can see the welding," Van Lieshout says. "On the other hand it's really nicely finished, with nice paint and that's Moooi's work. And that's good, this combination of perfection and roughness."

This movie was filmed in Rotterdam for Moooi. It is part of an ongoing collaboration between Dezeen and Moooi called Design Dreams exploring how successful designers turned their dreams into reality.