The "tradition of strong women doing creative, important things" is finally regaining momentum in Mexico, according to the female architects finding independent success in the country.

Mexican women – including Frida Escobedo, Fernanda Canales and Tatiana Bilbao to name a few – are among the country's most prominent architects, with many gaining major international success in recent years.

But it wasn't always this way, according to Canales, who said it is only in recent years that female architects have been able to run practices in Mexico, without needing a man to boost their credibility.

Mexico has a tradition of strong, creative womenFernanda Canales

"It's the first time in Mexico that you can have an office without a male partner," she told Dezeen.

"We have that tradition of strong women doing creative, important things," Canales said. "There were really great female Mexican architects doing a lot of things, a century ago, 50 years ago, but they were not recognised."

She added that it is only in the last 10 to 15 years that talented women have been celebrated in the country again. Prior to this, they received little or no recognition compared to their male counterparts.

Canales was chosen to design the 2018 Tamayo Pavilion – an important commission for the annual Design Week Mexico festival. The project is Mexico City's equivalent to the Serpentine Gallery Pavilion in London, which last year was designed by Mexican architect Frida Escobedo.

Opportunities like this are an example of how Mexico has started to recognise women architects, said Canales, who recounted numerous times that clients previously contacted her to recommend a man for a job.

She credited the recent shift in attitude to the influence of intercultural exchange, which has allowed women to see possibilities in the industry in other countries, and impacted change.

"A lot of people from Mexico are studying or living abroad and then coming back, and also foreign people working in Mexico bring new visions and ideas," Canales continued.

The shift in balance has also boosted Mexico's architecture scene, which Canales said has flourished in recent years due to female input.

She is among a group that have chosen to stay on their home turf, with others including Rozana Montiel and Gabriela Carrillo.

"There are more women participating, so that opens up new ways of thinking, new alternatives," Canales said.

Also among those achieving success in the industry is Tatiana Bilbao, who has also gained acclaim both at home and abroad for her socially conscious approach to architecture.

Her architect father encouraged her to join the profession, and she attributes her rise to fame in-part to her gender. "I have had more opportunities because I was a women," she said. "I really have found zero impossibilities."

I have had more opportunities because I was a womenTatiana Bilbao

As one of a few well-known female architects in the country in the early years of her career, Bilbao was "in the correct place at the correct time", and able to use this status to gain more opportunities, which in turn boosted her profile.

Then as her name became more widely recognised in the industry, more women were able to follow in her footsteps. "It's changing more and more because there are more women," she said. "It's really accelerated."

Gender equality is a still fairly new concept in Mexico, which only awarded women the vote in 1953 – nearly 40 years after the UK.

"The first time women voted in an election was more or less 70 years ago, which is nothing you see," said architect Gabriela Carrillo, who runs her Mexico City-based practice with Mauricio Rocha.

"My mother's generation of 1968 was a movement, which moved radically this condition which is a very conservative world where we live," Carrillo continued. "That was a generation ahead of us, which is nothing."

Running a firm and being a mother is really difficultRozana Montiel

But among the main challenges facing Mexican women today is that they are still typically in charge of domestic roles, holding them back from advancing their careers.

"Women are... responsible for everything," Bilbao said. "They run everything, they have to take care of the children, the elderly, the household in general."

"That's a major issue, being a woman," added architect Rozana Montiel. "Trying to balance being a practitioner, having your own firm, having a house and being a mother."

However, a growing presence of women in the Mexican architecture industry – Montiel's practice is "almost all women" – has lessened the stigma around parenting responsibilities.

She added that women's roles have also changed in professional partnerships with men. "More young women are coming and having their own studios, their own firms," Montiel said. "There are a lot of collectives, and partners, men and women, but now women have a different position."

Montiel praised Carrillo as one of the female architects working side-by-side with a male contemporary – the two have worked on projects such as a Mexican courthouse.

Having originally started as Rocha's employee, Carrillo worked her way up to receive partnership – giving her a gravitas not typically awarded to women in the industry.

"[It] gave me the opportunity to show my clients what I do," she told Dezeen. She also regards the advancements in gender equality in Mexico to architecture becoming more accessible.

Rather than solely working for wealthy clients, she said, architects are now making important contributions to the country's community – including social housing, and redevelopment efforts following the major 2017 earthquake in the capital.

Widening the project pool has also impacted opportunities for women. "More and more people believe that having an architect is exactly the same, whether they are male or female," Carrillo said. "That also has to do with the change of the vision of the community where we live."

For example, Montiel's portfolio includes a host of community projects like overhauling underused public spaces, pro-bono home for victims of the earthquake, as well as low-cost housing prototypes and residences that celebrate local materials.

It seems like a big boom... but it's just startingFernanda Canales

Along with gender-equality campaigns like International Women's Day, global marches and #MeToo, female architects worldwide are campaigning for ways to improve their rights and opportunities in the profession.

Flash mobs were held at the Venice Architecture Biennale and New York's AIA convention, and several prominent architects – both male and female – have spoken out on the issue, including Elizabeth Diller, David Adjaye and Dorte Mandrup. 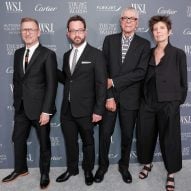 Filmmaker Beverly Willis, who created a movie last year to raise awareness of the women who have built projects in New York City, told Dezeen she initiated the project because hardly anyone can name more that one female architect.

Canales concluded that despite the recent flurry of press and recognition for female architects, there is still more to be done to improve gender equality in the profession, particularly in her country.

"It seems like a big boom, but you can count [the number of women] with the fingers of your hand," she said. "It's just starting."

More women in architecture and design