Cody Krecicki has created a website that uses artificial intelligence to determine the architectural style of a house using a single photograph.

Named Classify House, the website was designed by Krecicki to demystify architecture, by telling users the styles of architecture seen in any image uploaded to the site.

The website determines the styles seen in the image and rates the house based on how much it falls within one of the 31 different styles programmed into the AI, which include Georgian, Greek revival, contemporary and gothic.

"The AI looks at the edges and the colours found in each picture and classifies them into strings of numbers that are then compared to each other to decide which label to classify the picture as," Krecicki told Dezeen.

Krecicki programmed the website by giving the software pictures of buildings that were the purest versions of the different styles. From this point, the AI has been learning and improving its ability to recognise styles.

"Every time someone uploads a picture of a pure architecture that's not mixed with too many others types of designs and scores above 30 per cent [on an individual style] our AI stores the picture for our software to relearn later," said Krecicki. 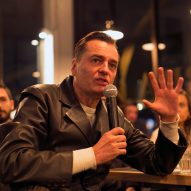 He built the site to help people learn what style their house was.

"I created it because I am getting my real-estate license and a chapter in the book was about different types of architectural styles," he said. "It is my first piece of real-estate technology and I thought would be useful to designers, home buyers and the curious."

No dominant style for many American homes

Although Krecicki believes that the website is very accurate, he has found that many building in the USA are a mixture of many styles and periods, so no dominant style can be determined.

"Architecture has become so watered down across the US that some houses won't see more than a 10 per cent certainty across all designs – usually it is a very ugly house," said Krecicki.

Artificial intelligence is being used in many areas of architecture.

Tech startup Bumblebee Spaces recently designed an AI "butler" that controls furniture that drops from the ceiling, while Zaha Hadid Architects principal Patrick Schumacher recently said that AI could be the future of prefabricated modular housing if we are "less paranoid" about technology.