Swarovski Manufaktur is a rapid-prototyping facility designed by Snøhetta at the crystal producer's campus in Wattens, Austria.

Snøhetta desrcibes the new Swarovski facility as a "crystal workshop for the 21st century". It combines design, product development and manufacture in one building to allow clients to be involved in the prototyping of new items.

"Bringing clients, designers, artists, researchers, machine operators, technicians and the public into one space under one roof is going to change how we think about these relationships in the future."

The building is part of the redevelopment of the Swarovski campus, which contains the company's factories and the Snøhetta-designed Swarovski Kristallwelten (Crystal World), which opened in 1995.

Along with Swarovski Manufaktur, a new factory is being built, while a crystal-cutting factory has been refurbished into a product-development building by Schlögl & Süss Architects, called Campus 311.

To make the prototyping process as efficient as possible, the entire production process for Swarovski crystal products was replicated on a smaller scale within the Swarovski Manufaktur building.

As a result, production time for making prototypes has been halved.

The building is arranged around a double-height space, which contains all the machines needed to manufacture prototypes and small runs of crystals. 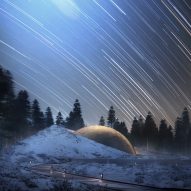 Snøhetta to design Norwegian planetarium surrounded by a constellation of cabins

The factory floor is designed to be flexible, with services under the floor. This means that, as technology advances, machinery can be updated to ensure prototypes can still be made in the shortest time possible in the future.

As light is so important to the designers and manufactures at Swarovski, Snøhetta designed the main manufacturing area to be flooded with daylight.

The entire roof is constructed from a grid of skylights. In total the ceiling has 135 openings arranged on a repetitive six- by three-metre pattern, protected with a solar coating.

"We have tried to understand what makes crystal so special and attractive, and to use these ephemeral qualities to create a specific atmosphere," said Patrick Lüth, managing director of Snøhetta's studio in Innsbruck.

"The space has an incredible amount of daylight penetration, which we believe is unparalleled in the typical production facility context. Crystals only come to life with light, so for us it is the intense presence of that daylight that is the most important aesthetic aspect of this building."

The ground floor also contains a cafe, while offices, showrooms and presentation rooms are all placed on a wooden first floor, which is suspended from the ceiling and has views over the manufacturing space.

Swarovski Manufaktur is accessed from the adjoining Campus 311 via a bridge connected to this first floor. A large timber staircase, which is also designed to be a meeting space, leads down from this entrance to the workshop.

Originally from Norway, Snøhetta also has offices in the US and France, as well as Austria.

The firm recently completed two matching elevated cabins at two of Norway's largest hospitals. It is also working on a controversial overhaul of Philip Johnson's AT&T Building in New York and designing an island campus for students in Budapest.

Photography is by David Schreyer.