Beijing-based architecture studio Trace Architecture Office has completed the Xinzhai Coffee Manor complex in the Yunnan Province, China, which processes coffee from the surrounding hills and is a hotel for visitors to the area.

Named the Xinzhai Coffee Manor, the hotel contains all the normal facilities alongside space for processing, storing, tasting, and selling coffee.

"Xinzhai Coffee Manor is like a collection of buildings linked by corridors, with part of the buildings serving as a resort," Trace Architecture Office told Dezeen.

The complex occupies a group of existing buildings that have been renovated  and extended in Bawan Village near Gaoligong Mountain, in central China.

The site had an abandoned cinema and a large grey brick building, originally built in the 1980s. As most of the buildings on the site are made of brick, Trace Architecture Office made several extensions and interventions from brick too.

"The building is greatly inspired by bricks, which leads to the use of different forms of vaults in architecture. Bricks are in fact commonly seen locally, most buildings on the site and in adjacent villages are made of bricks," explained the architecture studio.

Trace Architecture Office added two courtyards surrounded by concrete covered walkways to unite the buildings. A cafe is located alongside one of these spaces, with vaulted glass doorways that open into one of the courtyard.

A level below these courtyards the main building on the site contains the coffee storage facilities, processing space and the hotel rooms.

The vaulted ground floor is used for storage with the dimensions of the space and the thickness of the walls responding to the requirements of constant temperature and humidity needed to store the coffee.

Above this the coffee processing room sits at the mid-level of the building and has a ceiling patterned with a series of brick arches that extends across the full length of the space, which is large enough to facilitate roasting and packing. 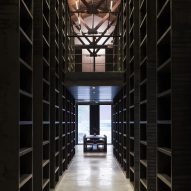 This room combines long steel beams and one-way brick vaults to obtain a continuous open space, while bringing in views from the courtyards and the valley. Side corridors allow visitors to walk around and and observe the coffee processing.

On the top floor of this building the hotel is placed to make the most of the surrounding views with large windows.

From the bottom to the top of this building there is a gradual transition from more solid structure to a light one, as the function changes from storage and processing to the hotel programming.

On the other side of the courtyard the cinema will be repurposed to house the coffee museum in the next phase of the development of the site.

Although tourism in the area is not yet well developed, many people travel to the region for hiking and to visit a nearby hot spring. The developers of the Xinzhai Coffee Manor hope the museum will be an additional draw card for tourists.

"Resort development is growing in the countryside area in China, it’s an evolution and transformation," explained the architecture studio. "New architecture in the rural space is transforming the area and enriching the local culture."

Trace Architecture Office was founded in 2009 by Hua Li. Last year, the studio converted a huge Beijing warehouse into an office and exhibition space for a local magazine publisher.

Photography is by Chen Hao and Su Shengliang.