Cloud-like ceilings and neon signage are just some of the playful features that design studio FormRoom employed to create this Instagram-friendly ice cream store in central London.

It is the first retail space of the brand, which has become popular for its wacky ice cream offerings, and will act as a blueprint for the design of all upcoming Milk Train branches. Until now they have exclusively traded out of pop-up food venues.

"The product itself holds such a sense of playful surrealism, and [the client] wanted to carry over that magic to the store environment," the studio told Dezeen.

"As this was their first permanent space, the design needed to be unique and interchangeable across all seasons; allowing the brand interior to evolve as swiftly as Instagram trends do."

Playing on its brand name, the aesthetic of a classic British steam train was the main inspiration for the store's interiors.

Upon entering, customers can choose from a menu that's printed on blackboards in white block lettering, intended to look like typical split-flap display boards that show train departure times at a station.

Seating booths numbered like train platforms have been completed in pale blue leather, a nod to the pastel hues seen throughout the feed of popular Instagram account Accidentally Wes Anderson.

Mind the melt – a play on Transport for London's cautionary phrase Mind the Gap – has been printed on the store floor, which the studio hopes will encourage customers to engage with the photo-sharing app's well-used hashtag #IHaveThisThingWithFloors.

A sequence of arched frames runs down the centre of the eating area, each topped with spherical pendant lamps. Two-dimensional cloud shapes have then been suspended from the ceiling, mimicking the steam emitted from a train's chimney. 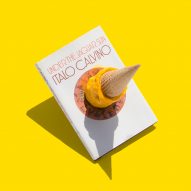 This is complemented by panels of frosted glass that have been installed at the store's front facade which are meant to resemble foggy windows.

The rear of the store has also been fitted with a neon sign and prop suitcases.

Late 2017 also saw the opening of an Instagrammable ice cream-themed museum in Miami – however, organisers were later fined after plastic remnants of its sprinkle ball pit were found littering nearby streets.

Photography is by Paul Lewis.