Edible plants were grown in a huge straw and clay sphere for Multispecies Neighbourhoods, an installation at the Oslo Architecture Triennale by local studio Atelier Dalziel.

The installation is a scale model of a "food forest" filled with more than 30 different edible plants.

The project intended to show how urban neighbourhoods could be more biodiverse, by introducing plants that are beneficial to both humans and other species.

Atelier Dalziel founder Matthew Dalziel said he wanted to demonstrate that humans are part of nature, not separate from it, so it makes sense for architecture and agriculture to be more closely interlinked.

"We can create human landscapes which become hugely beneficial to other species as well. It's gaining momentum as a discussion point for real viable alternatives to industrial agriculture."

Multispecies Neighbourhoods was designed as a conceptual prototype for a neighbourhood that exists in symbiosis with nature.

With the world facing a biodiversity crisis – nearly 40 per cent of all living species are predicted to become extinct by 2100 – Dalziel believes the preservation of "untouched nature" is the wrong approach. 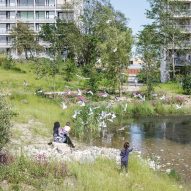 Five visions for the future of neighbourhoods from Oslo Architecture Triennale

He points to research showing how humans have been occupying rural environments for more than 12,000 years, as many indigenous communities still do, and argues that this is a healthier way forward.

"This idea about food forestry is ancient; it's older than modern agriculture and it's still present in the world today," he said.

A miniature swing is suspended between two plants, giving a sense of scale and suggesting the presence of humans.

Visitors can glimpse these elements through windows that puncture the straw and clay walls of the sphere.

The materials used to construct this structure, including its timber and hemp frame, were sourced from the local region to promote sustainable building practices.

In an interview with Dezeen, triennale director and chief curator Christian Pagh said the ambition was to champion an alternative to the "boring and banal" housing communities that have become the norm.

This isn't Dalziel's first involvement with the Oslo Architecture Triennale; in 2019, he was one of the event's four chief curators. His contribution included Power Plant(s)!, a water-heating system powered by compost.

With this latest project, he hopes to have a more direct impact on how architects are practising today.

"This project is about exploring that idea of how we make things, who we make things for, and what human settlement means in a more-than-human imaginative space," he said.

The photography is by Are Carlsen unless otherwise indicated.

The Oslo Architecture Triennale takes place from 22 September to 30 October 2022. See Dezeen Events Guide for an up-to-date list of architecture and design events taking place around the world.