The 20-square-metre extension was added to an existing stone house, nestled into a hollow in the rocky landscape overlooking the sea.

"The form was imagined as a sort of square martello or coastal watchtower," said Tierney Haines Architects.

Library Lookout is topped by a roof terrace, accessed via a stair at the rear of the structure and sheltered from the wind by a high parapet topped with lavender. The total height of the new extension matches that of the existing house.

"The slight elevation of the roof terrace offers panoramic views without protruding in this sensitive landscape, a feeling of being in the landscape rather than over it," added the architecture studio.

"This contrasts with the views from within the study which are of the close, sheltered garden."

A short zinc and glass corridor links the study space with the main house's master bedroom, mediating between the original building and the extension. 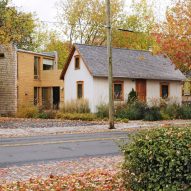 "The thick, well-insulated walls are intended to give a sense of protection and weight, and a change in atmosphere from the rest of the house, a world within itself," added the studio.

The roughly symmetrical plan of the study sees two writing desks – one for each of the clients – separated by a bookshelf unit and hidden storage units, lined with oak panelling.

Two large windows, one beside each desk, overlook the greenery in from of the house and give glimpses of the sea beyond. A smaller window, aligned with the link corridor, extends the visual axis of the main house into the garden.

The extension is clad in untreated cedar, which continues along the slightly sloped parapet and will weather to a silvery grey, blending in with the surrounding rocks as the building ages.

Simple, wooden spaces are a popular solution for artist's studios and writers retreats.

In Beijing, architecture office Zai added a wooden and glass studio to a traditional courtyards space, while Cutler Anderson Architects built a studio that doubles as a bunkhouse for sleepovers overlooking the Puget Sound in Seattle.

Photography is by Stephen Tierney.