New York architecture firm ODA has released visuals of a centre for a Jewish community in Brooklyn featuring schools, sports facilities and offices stacked on top of each other.

The project, an extension to an existing girls school, features a 12-storey cube with voids cut into it and spherical play spaces for pre-school children.

"Our design is guided by the principle that the cube is the most compact shape," said ODA, adding that each stacked element of the project has its own distinct form.

"The stacked campus leverages the benefits of a dense footprint, while addressing the shortfalls of vertical build," it said. "To ensure usability, every element stands on its own merits and could function independently in a traditional horizontal composition."

The building is an expansion of the headquarters of Beth Rivka, an international network of girls schools for the children of ultra-orthodox Chasidic Jews.

It will sit next to the existing four-storey, L-shaped school in Brooklyn's Crown Heights neighbourhood.

The 213,000-square-feet (19,788-square-metre) project incorporates a high school and a pre-school plus fitness and community areas. A rooftop garden that doubles as a playground completes the structure.

The studio claims the project introduces a new architectural concept they call the "sixth facade".

"Typically, a building is understood to have five facades — four sides and a roof — but we've identified a sixth in the surfaces that define a void," ODA wrote. "With this sixth facade, designs incorporate a new dimension."

A glazed high school sits above the street-level podium. Above this is the community sports centre, which is clad in steel mesh. A glazed pre-school sits above this. Various outdoor spaces have been cut into the volume while two of the spherical play rooms are visible from the street.

A separate street entrance gives access to elevators leading to the upper pre-school levels, which feature classrooms, a cafeteria, a music room, a therapy room and private offices. 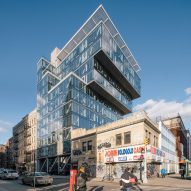 Here, the four "spheres of play" are designed for learning in an informal setting while natural light floods a triple-height atrium on the with pops of pink and a glazed roof. Stairwells and walkways offer views into the open-plan spaces.

Community facilities are located between the high school and pre-school elements. Amenities here include an indoor swimming pool, a solarium, gym, dance studio and locker rooms. An auditorium and two floors of private offices for rent complete this section.

Based in New York, ODA has completed a number of buildings across the city, most of which are residential. These include a top-heavy glazed structure in the Lower East Side, a "pixelated" condominium in Queens, and a colourful complex in Bushwick.

Closer to ODA's Crown Heights school proposal is an apartment building in Brooklyn's Gowanus area with stepped terraces on its upper levels.

Renderings are by Darc Studio.