Cascading balconies top this Brooklyn apartment block by American studio ODA, which is shown in a movie starring the design team throwing footballs, catching flowers and passing balloons between the terraces.

Photographer and filmmaker Miguel de Guzmán of Imagen Subliminal shot the film to showcase the "optimistic atmosphere of the life in the terraces", which ODA created on the upper corner of the 215 1st building.

As the movie shows, the cutaways allow for interaction between the residents that the New York-based studio hopes will foster a community in the building.

The setbacks also provide the residences on the upper floors with outdoor space and views of the Manhattan skyline.

"Standing higher than the neighbouring buildings permits sweeping views of Manhattan, both through expansive windows and from wide outdoor gardens, while still maintaining the feel of a small town community," said ODA founder Eran Chen.

The architects  designed the massing of the 80,000-square-foot (7,7432 square metres) block in response to the prominent corner location in Brooklyn's Park Slope neighbourhood.

The balconies step backwards and upwards to face 1st Street – a tree-lined stretch of brownstone residences – while a closed facade is oriented to the busy 4th Avenue.

"With its formal enclosed face along 4th Avenue giving way to a highly fragmented facade along 1st street, the building also introduces an alternative for residential corner buildings to engage with both the commercial avenue and residential street," said Chen.

According to the architects, who created a similarly playful facade for a condo building in Queens, this Jekyll-and-Hyde exterior demonstrates the changing identity of Brooklyn from a largely residential area to a commercial district.

"In this interaction between disparate exterior elements, 251 1st also references an abstract undercurrent – the generational and cultural shift, as Brooklyn, a once sleepy, largely residential outer borough, continues its transformation into one of NYC's great cultural epicentres," the studio said.

"In other words, both legs of Brooklyn's changing identity receive expression on the exterior of 251 1st."

ODA tasked Madrid and New York-based photography studio Imagen Subliminal to shoot a film highlighting the building's strong geometry and playful features. The movie features a mix of timelapse and hyperlapse – which involves changing the position of the camera between exposures – imagery, and panning of high-resolution stills.

"The twisted geometry of the corner reflects the tension between the residential street and the large scale of the main avenue," de Guzmán told Dezeen. "We wanted to highlight the dynamism of the design and also communicate the optimistic atmosphere of the life in the terraces."

"Most of the film was made using timelapse and hyperlapse techniques to create a playful look and a strong rhythm," he added.

Some of the scenes combine still images with videos to create different speeds in the same sequence of images, which also feature ODA's team drinking wine, dancing, observing the view and playing football.

The film was shot before the building's completion so that the team could have access to all of the apartments, and focuses on the exterior of the building to hide the unfinished interiors.

Internal renderings show soft finishes intended as a contrast to the geometric exterior. In the lobby, a mix of various woods, concrete and metal, provides a backdrop for a green wall.

Each of the apartments features a tall ceiling, full-height glass windows and doors, and a neutral palette, including white oak floor boards. Italian marble, imported porcelain, and white-honed marble will dress the bathrooms.

Other amenities include a pair of courtyards, a landscaped terrace, a library, stroller valet, as well as a fitness and yoga room, and a grooming station for resident's pets grooming station.

ODA has designed several other residential projects around New York City, including a two-block housing development meant to resemble a European village and a trio of towers massed to maximise views.

Imagen Subliminal is led by Miguel de Guzmán and Rocío Romero, and has created a series of unusual architectural movies.

Others include a sci-fi photoshoot for half-sunken house in Madrid, a horror movie set in kiosks of a temporary street market and a day-in-the-life film that follows the resident of an apartment with moving walls and secret furniture. 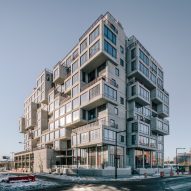