A dune-like concrete shell encases the Ayla Clubhouse in Aqaba, which Oppenheim Architecture has designed to blend in with the surrounding desert in Jordan.

The building forms the heart of Ayla Oasis – a 17-square-mile leisure centre under development in the city, for which Oppenheim Architecture has also designed a golfing academy.

"Ayla Clubhouse takes inspiration from the natural dunescapes and mountains of the surrounding desert as well as the architectural heritage of the ancient Bedouin," explained the studio.

"The distinct architectural form Ayla Clubhouse establishes a unique connection with nature by capturing the elemental, vibrant beauty of the rolling desert landscape."

Oppenheim Architecture built the Ayla Clubhouse with shotcrete – a type of concrete that is sprayed through a hose onto framework, often used to create curved surfaces.

An orange-coloured pigment was added to the concrete mix to help the building blend in with the desert landscape.

Instead of having "conventional walls and ceilings", the undulating form of the shell defines the spaces within the building. 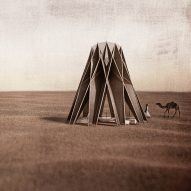 The panels are adorned with traditional Jordanian patterns, designed by Oppenheim Architecture to evoke traditional Arabic mashrabiya and filter in dappled light.

Oppenheim Architecture is an architecture practice founded in 1999 by Chad Oppenheim with studios in Miami, New York and Europe.

The studio also recently completed a Swiss water-treatment plant, which uses a mixture of pink-hued stone and clay to resemble a natural rock.