An exhibition of paintings, drawings and sculpture made by Ai-Da, a humanoid robot with artificial intelligence, has been unveiled at a gallery in the UK.

Ai-Da, who is named after pioneering scientist Ada Lovelace, was revealed along with her creations at St John's College at the University of Oxford.

The AI robot, who was invented by gallery director Aidan Meller, can draw things from life using an inbuilt camera, a mechanical arm developed at Leeds University, and algorithms developed by scientists at Oxford.

In order to draw, the camera analysis the object in front of it and creates a virtual path, which is fed into a path execution algorithm that produces real-space coordinates for the robotic arm.

Facial-recognition technology allows her to draw pencil portraits of people by scanning their features with the cameras in her eyes and using the robotic arm to map them on paper.

To create paintings, Ai-Da's drawings are fed into AI algorithms that interact with the Cartesian plane to plot them along two axis and create abstract versions of her art.

A 3D-printed sculpture of a bee was created by combining a drawing Ai-Da did of a micro-CT scan of a real-life bee made by professor Javier Alba-Tercedor.

This drawing was fed into an AI Bees Algorithm that used swarm intelligence to interpret the coordinates of the drawing. 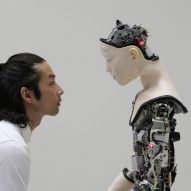 The resulting distortion of the original bee anatomy was then rendered by a scientist in Sweden, 3D-printed in wax and then cast in bronze.

Video pieces featuring Ai-Da include one where she recites poetry generated from AI using prison literature.

The exhibition, called Unsecured Futures, also sees Ai-Da perform. She starts with pencil sketches before switching to paint and clay.

"The exhibition questions our relationship with technology and the natural world by presenting how AI and new technologies can be simultaneously a progressive, disruptive and destructive force within our society," said the gallery.

"As a humanoid robot, she is an art object in herself, raising questions surrounding biotechnology and trans-humanism," it added.

Other recent exhibitions exploring robots and AI include an installation filled with white spheres programmed to move as if they had their own personalities, and a bunch of robot arms programmed to behave like a pack of animals.

Unsecured Futures is on show at St John’s College, The Barn Gallery, St Giles, Oxford, from 12 June until 6 July 2019.

Photography is by Victor Frankowski unless otherwise stated.