Sony has staged an artificial intelligence-themed exhibition, featuring a field of white spheres that move as if they have their own personalities.

The Japanese electronics company took over Spazio Zegna during Milan design week with the Affinity in Autonomy exhibition, which explored the future of robot-human relations.

The exhibition was partly inspired by Aibo, Sony's robot dog, which was one of the first consumer companion robots when it launched in 1999, and has since been rebooted with artificial intelligence (AI).

Aibo and a number of other Sony products were on display in one section of the exhibition, but to reach them guests had to pass three other zones that each explored autonomy in abstracted ways.

The first zone, Awakening, was a simple light and colour installation that aimed to "heighten sensory awareness" with illuminated blob-like shapes that mimicked a visitor's body movements.

The second zone, Autonomous, held a pendulum within an orb-like cage. Rather than being left to gravity, its swing was influenced by the presence of people in the room, so it would appear to greet them they entered.

"It may make visitors question their feelings and responses in this situation," said Sony.

A third zone, Accordance, was the most large-scale and immersive, featuring numerous smooth white spheres of different sizes.

Echoing the research of designer Madeline Gannon, Sony described the effect as making the robotic balls seem to have a "personality".

After that came two more zones: Affiliation, where visitors could interact with various Sony products such as the Aibo dog, and Association, which asked guests for their views and feedback via robotic plinths that would approach them proffering a screen and smart pen.

Sony said the exhibits were meant to show that when humans "feel that our robotic friends are alive", we display emotion and affinity towards them — hence the title of the exhibition.

"Affinity in Autonomy shows the evolving relationship between humans and technology, a glimpse into what the future of AI x Robotics could look like – exploring robotic intelligence and emotion," said the head of Sony's creative centre, Yutaka Hasegawa.

"Since its inception back in 1961, Sony has been at forefront of design and innovation by keeping true to the founders' doctrine of 'do what has never been done before' and 'always stay one step ahead'," he continued. 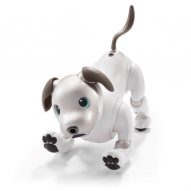 "Since the creation of the world-first entertainment robot, Aibo, in 1999, Sony has continued to grow its knowledge and understanding of AI," Hasegawa added.

"The exhibition draws on Sony's credentials in this field, with the evolution, emotion and behaviour of robotics prompting learning, growth and development with companionship playing a part."

The installations were built around two of Sony's sensor technologies: the CMOS (complementary metal oxide semiconductor) image sensor and the back-illuminated Time-of-Flight image sensor, which calculates the distance to an object by measuring the time it takes for light to reach it and reflect back to the sensor. 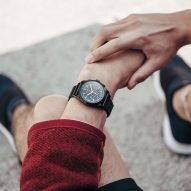 Affinity in Autonomy ran from 9 to 14 April at Spazio Zegna in Milan as part of the city's annual design week.

With smartphones, televisions and the PlayStation gaming console among its biggest sellers, Sony is one of the biggest electronics companies in the world. Its recent products include the Wena smart watch strap and Xperia Touch projector, which turns any surface into a tablet.