Called the Flow Wall, it runs throughout 19,000 square metres of lounge space in Istanbul Airport, creating what Softroom describes as an "intuitive route that transcends barriers of language and culture".

"Passengers will move effortlessly through zones and the form of [the wall] will relate this experience to the lightness and the dynamism of air travel," explained the studio.

The studio created the wall in just 30 weeks using parametric design – an algorithm-based process that allows you to test the various outcomes of a design concept within a set of parameters.

"The parametric script was able to quickly customise the smoothing of the wall's curves and the number of light strips, as well as provide a real-time preview of the wall's final form," he told Dezeen.

"We continued to use the script to fluidly develop the design of the wall as it flows through the different spaces and respond to the constraints in both structure and M&E."

The undulating wall is visible upon entrance to the airport, topped by a huge gold-metal Turkish Airlines logo. It guides travellers from the check-in counters, through to the lounge entrances and then to a central space populated by shops and other amenities.

Its form rises and dips to draw attention to different features in the lounges – for example in the cinema room it tapers downwards to direct sight lines to the screen, whereas it peaks "like a beacon" above one of the lounge's restaurants. 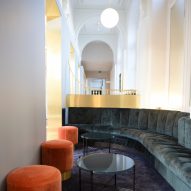 Constructed with a plywood framework, the wall has been covered with bleached strips of oakwood and carved to feature seven grooves – a subtle nod to the fact that Turkish Airlines fly across the world's seven continents.

These grooves have been inlaid with over three miles worth of LED lights, which can be set to pulse when necessary.

The six new lounges comprise of two international departure lounges – one dedicated to business class and another for those part of Turkish Airlines' loyalty programme – respective lounges for frequent flyers and general arrivals, and two domestic lounges for those flying within Turkey.

In the business class lounge there are sleep suites where travellers can rest and recharge, complete with sand-coloured furnishings and warm wood writing desks. There is also a museum-style space lined with display cases which will host a changing array of Turkish artworks and historic objects.

There is also a children's play area, prayer rooms and work pods dotted throughout.

Softroom is based in Lambeth, south London, and is headed up by Christopher Bagot and Oliver Salway. The studio often takes on large-scale projects – back in 2017 it designed a new lounge for business-class passengers of the Eurostar, completing its interiors with plush furnishings and marble fireplaces.

Photography is by Büşra Yeltekin, except where stated.