British-Dutch manufacturer Unilever has long had its North American headquarters in Englewood Cliffs, New Jersey, just across the river from New York City.

But increasingly, the company has needed a more dynamic work environment to help recruit employees.

Architecture firm Perkins+Will was charged with rethinking the corporate campus, which accommodates about 1,450 employees and several hundred independent contractors.

The goal was to create a showpiece headquarters that would be "smart, sustainable and Instagram-ready – with a feeling like you were in Manhattan".

Rather that razing the site and starting fresh, the architects chose to renovate four existing rectilinear buildings. They also added a lofty central atrium that rises 40 feet (12 metres) on the site of a former courtyard.

"The 325,000-square-foot renovation included interiors, as well as the construction of an entry pavilion and common area that stitched together the open space between individual buildings to create an entirely new, enclosed structure," said the firm.

The existing buildings, which date back to the 1960s and 70s, are completely revamped.

Traditional, cellular layouts are replaced with open workspaces, huddle rooms and lounges. Because there are no assigned desks, lockers have also been added, providing employees with a secure place for their belongings.

The central volume houses The Marketplace, where employees can shop, work and socialise. The vast, light-filled space features cafe tables and a giant staircase that doubles as seating.

Additional amenities at the campus include coffee stations, a fitness centre, a hair salon and a cafeteria. 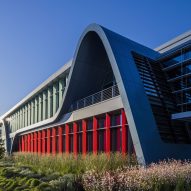 Throughout the facility, concrete floors and exposed ceilings give interior spaces an industrial look. Wooden decor and eclectic furnishings help soften the atmosphere. In one area, the team created a living room, complete with a fireplace set within a brick wall.

The building features a range of smart technologies, including thousands of sensors that measure light, temperature, humidity, carbon dioxide and human presence.

"The final building design incorporates smart technologies by EDGE that record data and automate the building's features and functions, including internet-of-things systems that enable the building to learn from occupants' behaviours and remember their preferences," the team said.

In addition to the smart systems, the building's sustainable elements include solar panels and ample natural light.

During construction, 75 per cent of the construction material was diverted away from landfills. To help reduce car usage by employees, the company offers a shuttle service from New York City, Hoboken and Jersey City.

The bevy of sustainable features enabled the project to earn LEED Platinum – the highest level – from the US Green Building Council. Moreover, the council recently named the building commercial project of the year.

Other recent office projects in the US include a technology campus in Silicon Valley, which features glazed walls and curvy facade elements, and a Google office in Los Angeles that occupies a converted airplane hangar dating to the 1940s.