Called Spot, the toy is geared at learning and discovery. It functions primarily as a handheld scanner that kids can point at an object around them — think a flower or a bird — to hear it talk back.

Using its AI software, Spot recognises the object and voices a little monologue from it, incorporating information to suit children ages five to nine.

There's also a secondary function that comes into play at bedtime, when Spot uses its in-built projector to present a story woven around the day's discoveries.

Spot is a concept at this stage, one that grew out of the research New Deal Design conducted into children's development.

The designers found that the right kind of toy could encourage focus and "a natural pace of experiencing", as opposed to instant gratification. They wanted to foster a kind of junior-level mindfulness that would set kids up with positive life skills.

"By encouraging focus skills, Spot can battle the 'distraction economy' at a crucial stage of development," said New Deal Design.

"Being 'present' and 'in-the-moment' is a skill that can be taught, and studies find that it nurtures a sense of 'mindfulness' that incites self-confidence and self-awareness."

They have grown the project into a physical model, microsite and case study, all of which they are showcasing at this month's San Francisco Design Week (SFDW). 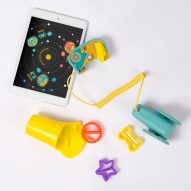 New Deal Design is one of the world's leading tech design studios, with past work including the Fitbit, stick-on Fever Scout thermometer and Postmates' Serve delivery robot.

The studio's expertise is reflected in Spot, which the studio describes as presenting a "new paradigm" in digital interaction design that moves towards "doing" rather than just "observing".

In terms of appearance, Spot has a sophisticated, only faintly anthropomorphised look, with its 3D camera and pico projector embedded in an "eagerly tilted" head.

The finishes are smooth and subdued, including a wooded handle and pops of yellow on a button and base. The choice of materials was inspired by traditional kids' building blocks.

When Spot recognises an object that it's pointed towards, it blinks and vibrates to signal it has locked on. Its head also locks into place to counter any fidgeting.

As an example, New Deal Design  describes a girl called Max, who among other things, encounters a robin while out with the toy. Via Spot, the bird says, "Hi Max, my name is Robin! Boy am I hungry. Did you know..."

At that night's Story Time, Spot starts "Once upon a time there was a little girl named Max who met a robin. One day, Max asked the robin..."

New Deal Design says that day summaries like this helps kids to wind down and get better sleep. Seeing themselves at the centre of stories also helps to build self-confidence and self-awareness.

Among other tech-enhanced toys aimed at children in this age group are the conductive play dough kits from Technology Will Save Us and Lego's Boost robot builder.

Spot will be on display during SFDW's Open Studio Crawl on June 21.