Architecture firm Snøhetta has unveiled a plans to renovate and extend a mid-century arts and performance complex in Honolulu, Hawaii.

Snøhetta designed the plan for the Neal S Blaisdell Center, a 22-acre (nine-hectare) complex on the island of Oahu. Constructed in 1964 as a living memorial for Hawaii's veterans and war heroes, today the centre forms one of the state's "premiere arts and cultural venues".

"The Blaisdell Center draws nearly 800,000 visitors a year," said Snøhetta in a project statement. "As a fixture of the local community, it is known as a place where memories are made, where most locals attend graduations and cherish fond memories of the fish pond."

This existing pond prompted Snøhetta to add a series of water features across the complex, including fountains, jets and waterfalls. These, when paired with lush tropical pathways, are intended to promote community gathering, and better connections across the site.

"Inspired by local perceptions of space and environment that emphasise a deep connection to the land and a reverence for natural resources, the project is conceptually guided by the significance of water in Hawaiian culture," said Snøhetta.

The Arena and Concert Hall currently anchor opposite ends of the property, and the campus has long-struggled to balance pedestrian and vehicular movement between the two venues.

The masterplan aims to connect these two structures together by adding a new Performance Hall with 1,500 seats, and a new Arts Ensemble building, in between them. A new Exhibition Hall will also be built to replace the existing one, and join the Performance building via a lobby.

These new structures will feature stratified basalt bases and perforated terracotta screens around the tops, which Snøhetta says takes cues from existing structures on site.

Renderings of the interiors show sculptural pale wood spaces, designed to add warmth and be "reminiscent of the swells of water and wind".

Other new additions include The Gardens and Event Plaza, which will be used for performances and recreation activities.

Snøhetta has also developed a renovation proposal to update the existing Concert Hall and Arena with a "light touch".

The Concert Hall, which hosts the Honolulu Opera Theatre and Honolulu Symphony Orchestra, will retain its rectilinear structure and low arches at its base, preserving the architectural vernacular of the open-air lanai. The refurbishment will fill voids on the lobby's upper balconies with glass volumes.

The Coconut Grove surrounding concert hall will be given wider pathways and plenty of tropical plants, to make the outdoor area suited for intermission, receptions, cafe seating and small gatherings.

Other amends will be made to the scalloped, circular complex The Arena. While its exterior features will be preserved, the interiors will be overhauled to better suit hosting performances and rock concerts. 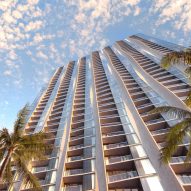 Snøhetta has also proposed enclosing the arcade wrapping the building, to create a more comfortable, air-conditioned space. Additional details include feathery, slender louvres that will be added to control the building's sun exposure.

Completing the masterplan is a new pathway that connects back-of-house facilities with a single, below-grade service area. Tropical plants and gardens will be used to conceal this new support space.

A stormwater management system will be placed along the street edge to filter groundwater, and the centre's original fish pond will be preserved. Also included are a new parking structure and sporting facility.

Blaisdell Center is located in the hub of Honolulu, with the capital city's skyscrapers and beaches nearby. It is flanked on by major roads on three sites, and is also near the Honolulu Museum of Art.

Other recently completed projects include Shoreline Waikiki hotel by BHDM, a skyscraper with a cantilevering glass-bottom pool by SCB, a renovated hotel by OMFGCO and a property sales centre by Woods Bagot.

Founded in 1989 by Craig Edward Dykers and Kjetil Trædal Thorsen, Snøhetta is an architecture and design office based in Oslo and New York City, with other outposts in San Francisco, Stockholm, Innsbruck and Singapore.

Other new civic projects also by the firm include an Italian mountaintop museum, a major new opera house in Shanghai, and an island-like student district in Budapest.

Renderings are by Snøhetta unless stated otherwise.