One of the 20th-century brick houses has been renovated and is occupied by the design studio, Irma Boom Office (IBO).

Eenwork, the gallery run by Boom's partner, occupies the new structure next door.

From the street the old and new halves of the programme appear distinct, but they blend together internally via a series of visual and physical connections.

"For the user and the visitor the transition between the modern and the classical spaces is almost imperceptible," said Barend Koolhaas.

The distinctive stepped form of the new gallery's front facade, with its angled basalt-clad balconies, was designed to avoid blocking the windows of the adjacent IBO space.

Inside the former house the original domestic interiors have been refreshed and given new fittings to turn it into an office and library. Special curtains that can be used to darken one of the rooms for video projections have also been installed.

In contrast, the new gallery floors have been kept as open and transparent as possible.

"With large windows in the front and back, the gallery space's transparency puts the context on display as well as the art," said the architecture studio.

"From outside one can see right through the building and get a preview of the work inside."

Each floor of Eenwerk is configured differently to accommodate a variety of exhibition styles.

The ground floor has north-facing windows and a garage door at the back, to allow artworks to be brought in. The middle floor has windows at both ends.

The top floor can function as a greenhouse space, "equally suited to growing plants and vegetables as it is for presenting work in an Arcadian setting". 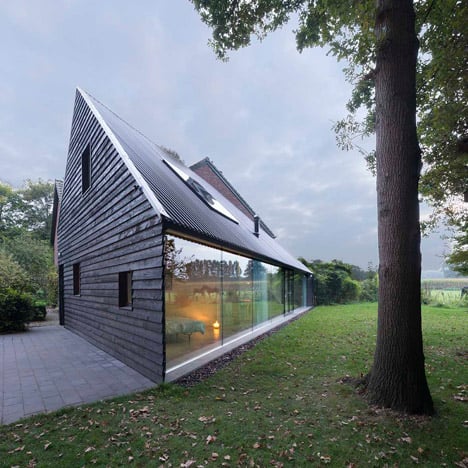 New staircases and voids in the dividing wall connect the two spaces together, so people can move around Eenwerk & IBO in a continuous loop.

The entrance to the gallery sits beside a new sidewalk garden designed by Dutch landscape designer Piet Oudolf.

The ubiquitous Amsterdam apartment block has recently been the subject of many modern reinventions.

In 2017, 31/44 Architects built a new house on the site of an old worker's cottage, and the year before, WE Architecten designed a co-owned apartment block with arched brick openings.