Pavilion Le Corbusier has reopened to the public in Zurich after architects Silvio Schmed and Arthur Rüegg restored the art museum to its original state.

The colourful museum is the final project built by the pioneer of modernist architecture, and its glass and steel structure was an unusual departure from Le Corbusier's predilection for concrete.

Started in 1964 and completed in 1967, two years after the Swiss architect's death, the four-storey glass and steel structure was designed for Swiss gallery owner and interior designer Heidi Weber. Weber commissioned the building to be dedicated to the artistic works of her friend, Le Corbusier.

After a 50-year lease from Zurich council on the land it sits on ran out in 2014, the pavilion – a heritage listed building – reverted to being property of the city.

Pavilion Le Corbusier has a facade formed of large enamel panels painted in white and primary colours, and is topped by a roof terrace accessed by a concrete ramp and sheltered by a distinctive free-floating canopy.

Weighing 40 tons, the roof is formed of two parts made out of welded metal sheets that were prefabricated off site then craned into place.

The roof was put in first to shelter the rest of the construction process, including the pouring of the concrete base. Steel frames with a modular design were assembled underneath, then the walls, floors, windows and doors were fixed into place with 20,000 steel bolts.

The arrangement of the 1.13 metre by 2.26 metre coloured panels are arranged around the floor-to-ceiling glass windows in a pattern based on the architect's modular scale of proportions.

Each panel is a metal sheet clad with an enamelled panel on the facade side and a wood veneer on the interior. Engineer Jean Prouvé helped Le Corbusier with the panel design, integrating neoprene seals for the glazed parts in a style usually used by the car industry.

A chrome cockpit-style micro kitchen occupies a 2.26-metre-long corner of the pavilion, with built-in shelves for glasses hidden in the bright red cooker hood.

Apart from the base and ramp, a singular use of concrete comes in the form of a sculptural free-standing staircase that zigzags through the centre of the building.

Up on the flat roof, curving metal benches line the edge of the terrace, with it's mid-century nautical-style guardrails.

Le Corbusier designed every detail of the pavilion down to the door handles, including a bronze recessed door handle in an hourglass shape, and cloud-shaped oak-wood handles on glass doors.

When the city took over the lease a survey revealed that the building's modular steel structure had suffered significant degradation over the years, requiring careful restoration by Silvio Schmed and Arthur Rüegg on behalf of Museum für Gestaltung Zürich.

Rust had corroded holes into the metal structure, which had been painted over seven times, and the neoprene seals on the glazed panels were no longer watertight, along with the concrete in the basement. 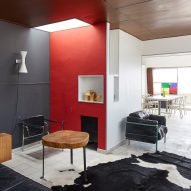 Le Corbusier's Paris home reopens its doors to the public

Coating for the steel canopy had levels of toxicity that were 250 times higher than modern health and safety standards. Its underfloor heating had stopped working due to corrosion in 1982, and the air conditioning in the basement no longer functioned.

Schmed and Rüegg restored the pavilion, which reopened in the spring of 2019, bringing it up to current architectural regulation standards. The architects also produced copies of Le Corbusier's original tree-trunk furniture designs and his giant light sculptures to populate the museum.

Le Corbusier Pavilion was originally called the Heidi Weber Museum, and intended to be an exhibition space for the Swiss architect's work. Weber is an enthusiastic supporter of Le Corbusier's artistic output.

"I had only one wish: to help Le Corbusier get the recognition for his paintings and sculptures which he deserved," Weber wrote about the vast vast personal collection she amassed.

"His paintings and sculptures should become world renowned, but they should never fall into the hands of speculators."

Unhappy at Zurich's decision to rename the museum, Weber removed Le Corbusier's works from the pavilion. Her son told Limmattaler newspaper in 2016 that Weber was negotiating with the authorities in Shanghai and Santiago to open a house dedicated to Le Corbusier there.

Pavilion Le Corbusier is an attraction in its own right, but as a public museum it also hosts relevant exhibitions.

The opening exhibition is called Mon univers and explores the architect's love of collecting, featuring photographs, paintings and bronzes, with items on loan from Fondation Le Corbusier in Paris and the Antikenmuseum Basel.

Le Corbusier was one of the most influential architects of the 20th century. His best known world include the Villa Savoye on the outskirts of Paris, the Ronchamp chapel, and the La Tourette monastery.

Last year the house within Le Corbusier's Immeuble Molitor in Paris, where the architect himself lived for thirty years, reopened to the public after restoration.

Photography is by ZHdK unless otherwise stated.