US firms StudioWTA and ASH NYC have transformed a church, rectory, convent, and a school in New Orleans into boutique accommodation.

Hotel Peter and Paul takes over four buildings that were built along a street in the city's Marigny neighbourhood in the 1800s.

The set comprises a Catholic church and rectory, built by New Orleans architect Henry Howard, and a schoolhouse and convent, which were used up until the end of the 20th century.

Local practice StudioWTA designed the conversion of the quartet into a hotel, while New York City design firm ASH NYC designed the interiors with the help of local resident, and former travel and food journalist, Nathalie Jordi.

Hotel Peter and Paul comprises 71 guest rooms spread across the schoolhouse, convent and rectory – which also hosts the Elysian restaurant and bar and a small cafe.

The church, meanwhile, serves as a space to host events for locals and guests, such as weekly free yoga classes.

StudioWTA's design aims to preserve the existing layout as a reminder of the structure's former use, leaving the cypress wood mouldings, stained-glass windows, wainscoted corridors and marble fireplaces.

The church is left stripped back with damaged stained-glass windows repaired to match the originals.

The main transformation was the conversion of the schoolhouse's loft to create an extra floor to host more guest rooms.

The hotel rooms in the schoolhouse are arranged along a corridor, following the existing floorplan.

On the third level, these culminate at the school's former performance stage, where additional suites now accommodate the old back of house area. The wall and doors fronting these rooms are painted in a mural of a sitting room.

In front of the stage, the team has created a library lounge for guests, stocked by the local bookstore Blue Cypress Books.

ASH NYC's decor peppers religious iconography throughout the bedrooms, including paintings and lights topped with small crucifixes. Furnishings include a mix of designs custom made, either by ASH NYC or local craftspeople. Antiques were also sourced by the design team. 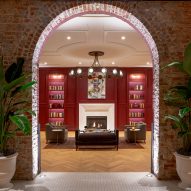 A key feature of the interiors of Hotel Peter and Paul is the use of bright, bold colours, with yellow, blue and red, which is intended to draw on the hues of the religious paintings and tapestries.

Guest rooms are each assigned an individual hue that features in gingham bed linen, curtains and bathroom wall tiles.

The main dining area of the Elysian Bar – an all-day eatery located in the former rectory – is decorated almost entirely in yellow hues, including curtains and upholstered seats in a mix-match of patterns and the greenery.

A second dining space is brightened by yellow walls and tables, while see-through curtains wrap the surrounding glass walls.

Doors lead to an outdoor dining area. In the adjoining bar area, yellow is contrasted by pops of red found in the leather seats of the wooden bar stools, and the table and ceiling lights.

Behind the bar, a sculptural, tree-like form grows up the walls and over the ceiling. It is made from the same material used for the floats used in the parade that takes place during the city's annual festival Mardi Gras.

Hotel Peter and Paul is ASH NYC's third hotel, following The Siren in Detroit, Michigan, which opened in March 2018 and The Dean in Providence, Rhode Island, which opened earlier in April 2014.

The property is among a series of new design-focused accommodation that has recently opened the New Orleans, forming part of a development boom after the devastation caused by Hurricane Katrina in 2005.

Others include the Ace Hotel and its accompanying boutique house Maison de la Luz, which was designed by Atelier Ace and Studio Shamshiri, as well as the Drifter Hotel.