Californian architect Ryan Leidner has slotted a garden in between a renovated 19th-century residence in San Francisco's Mission district and its minimal extension to the rear.

The Harrison Street House was originally built in 1888, and served as a saloon and residence for the owner upstairs. The property saw several uses in the following years, but fell into disrepair until the new owners acquired it.

They tapped Ryan Leidner Architects to overhaul and add the extension, which architect Leidner as a "modern counterpoint to the urban context".

Although the home's materials employ a minimal palette, the architect still took cues from the historical structure and other buildings in the neighbourhood. Horizontal siding boards clad the exterior of the the new extension to create a "playful interpretation of scale and materiality".

Leidner left the centre of the lot for a garden tucked between the historical structure and the new dwelling to create separation between them and their functions.

"Conceived as a home in two parts, the more private functions of the house take place in the newly built two-story structure at the rear of the lot, while opposite the courtyard, a remodeled front building is used for more social functions and gatherings," said Ryan Leidner Architects in a project description.

The yard is decorated with lounge chairs, planters, and a young tree in the centre, and forms the main access to the property.

In the old saloon building, which is referred to as the "front home," the upper floor was removed, creating tall ceilings inside that are rendered white. The layout is open-plan so it can be easily adapted for different uses, such as gatherings, dinner parties, or as a relaxation space.

"Keeping with a subtle palette of natural wood tones and white surfaces, the front house was designed to be a relaxed social space, where kids' playtime and afternoon lounging can easily evolve into an evening dinner party," said the architect. 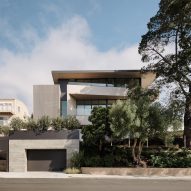 Large sliding glass doors lead from the courtyard into the new volume at the back of the property, which contains the family's kitchen, living and dining room.

Leidner made the most of the small 1,320-square-foot building (122 square metres) by covering an entire wall of with storage shelves. These cabinets are also used to disguise a bathroom behind.

Wooden stairs leads to the upper floor's two bedrooms, which are separated by a landing. The team covered the floors in bleached douglas fir boards to complement the exposed wooden rafter ceiling and "give warmth and rhythm to the spaces".

The owner's bedroom overlooks the central garden, while the children's room is placed at the back. A compact outdoor area is immediately adjacent to their bedroom, offering them an outdoor play area.

Other renovations projects in San Francisco include a home in the Twin Peaks neighbourhood surrounded by stepping gardens by Feldman Architects and an automotive garage that was converted into a home, studio, and gallery for artist Klari Reis.