Italian furniture brand Arper has appointed Armin Broger as CEO, following his departure from rival brand B&B Italia in April, after just a year in the job.

Broger replaces Vincenzo Rivizzigno who has stepped down after fifteen years in the role.

In a statement announcing the appointment, Arper declared its intention to consolidate its position "within the premium segment of the design furnishing industry at a global level".

Chairman of Arper, Claudio Feltrin, praised the outgoing CEO and said that Rivizzigno's tenure "led to the success, growth and internationalisation of Arper".

"I warmly welcome Armin to the team," he said. "His international experience and strong leadership skills will undoubtedly make him capable to lead Arper to reach its ambitious goals."

Broger began in the role last week, after leaving B&B Italia in April after a year as CEO.

His departure came at a time of significant upheaval for B&B Italia and its recently formed parent company Design Holding, which also owns Flos and Louis Poulsen.

After presenting the biggest stand for many years at the Salone del Mobile in April 2019, Piero Gandini, the long-standing CEO of Flos and chairman of Design Holding stood down in May citing "different strategic and management views".

Arper was established by Claudio Feltrin's family in 1989, which owns Marco's Group, the brand's parent company.

Rivizzigno will continue to work with the Feltrin family within the context of Marco's Group, where he will lead the development of industrial activities not connected to the Arper brand. 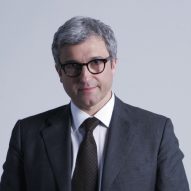 "I would like to thank Vincenzo on behalf of the Feltrin family for all the years he dedicated to Arper, for his hard work and outstanding energy and for the great results he helped the company achieve," said Claudio Feltrin.

"I am sure he will accomplish extraordinary things in his new role," he continued.

Arper is based just outside Treviso, 30 miles north of Venice. It currently has 11 showrooms around the world, including in London, New York and Tokyo, as well as a network of dealers in 90 countries. In 2018, 92 per cent of the brand's turnover came from exports.

In the last decade the brand has presented a colour-themed installation at Milan design week, and relaunched a limited edition version of the Bowl Chair designed by the late modernist architect Lina Bo Bardi.