Architecture studio Cristián Izquierdo Lehmann has designed this wooden house in Chile around a central, square-shaped room with a dramatic vaulted ceiling.

Named after the town where it is located, the House in El Peumo is situated in Chile's O'Higgins Region, just south of Santiago. The dwelling sits atop a sandy plateau surrounded by pine and cypress trees.

Encompassing 163 square metres, the building consists of four wings arranged in a pinwheel formation around a central, square-shaped volume. Patios occupy the open areas between each wing.

"The project is conceived as a central cabin that gradually opens to the landscape in four symmetric fronts, following a continuous constructive module of two feet," said Cristián Izquierdo Lehmann in a project description.

The central room encompasses the public functions – cooking, dining and relaxing – all of which take place under a four-pitched ceiling with a skylight. The room features retractable glass doors, placed in "symmetrical rotation along the center of the plan".

Each wall in the public zone has a designated use. One houses shelving for books, while another contains closets. The other two accommodate a concrete chimney and kitchen storage and appliances.

The wings contains the bedrooms, each with a large window that provides a strong connection to the landscape. The private rooms were designed to provide peace and solitude. 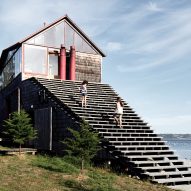 "When the bedrooms shut their doors, they disappear between the walls, becoming cut off the noise and circulation of the rest of the house," the studio said.

The home is constructed of laminated pine, which was left uncovered – "making explicit the constant measures and joints that rule the project". In addition to an abundance of wood, the interior features concrete flooring and simple decor.

Facades are protected by horizontal eaves that extend from a faceted, asymmetrical roof. Made of zinc, the roof is composed of triangular planes, which run from the edges of the skylight to the eaves' corners. The roof's geometry is governed by the same logic used inside the home.

"The form and pitch of each plane results from the 5:7 proportion ruling the central room and the height difference between the centre and the borders," the studio said.

"The symmetric rotation of this asymmetrical form produces the figure of a whirlwind, thus blurring the difference of the concave centre and the horizontal perimeter into an organic totality."

Other recent homes in Chile include a remote retreat by architect Guillermo Acuña that features a tall, wooden staircase leading to an old boathouse, and a kinked house by Ignacio Correa that consists of corrugated metal, high-performance glass and exposed wood.