Architect Guillermo Acuña has added a wide wooden stair to an old boathouse as part of his self-designed retreat on a remote bluff in Chile.

Acuña complete the property on the remote peninsula of Isla Lebe, which is located just off the Chiloe archipelago's Rilan Bay in the south of Chile. This part of Los Lagos province is known for its idyllic coastal setting and natural beauty.

"The small five-hectare island looks towards the fjords and channels that make up the Desertores archipelago, between the Michinmahuida and Corcovado volcanoes," Acuña said in a project description.

"Every six hours, large masses of water flood then empty the horizon, connecting and disconnecting the island from the nearby coast as the marine ground appears and disappears almost without notice," he added.

Aptly named Isla Lebe, the residence comprises three pavilions that are connected to each other and the nearby beach via staircases and boardwalks that cut through the surrounding vegetation. Their simple wooden structures are covered in larch shingles, a deciduous species that has gained a silvery patina from the salty air.

The largest of the three structures is a repurposed boathouse, to which Guillermo Acuña added an additional floor with two separate living suites above.

The ground level, where boats were previously stored, was converted into a kitchen and dining room. The walls, ceiling and floor are all painted red, while antique furniture and memorabilia lend this space a festive and unique ambiance.

"I did this because there is a native bush which grows around the houses called Chilco, which has vibrant red flowers," Acuña told Dezeen. As for the furniture, he explained that many of the objects were salvaged from a nearby church that was destroyed in an earthquake.

On the upper level, the architect extended the home with a similar wooden structure. This time, he left the material in its natural colour, creating a more muted feel for the sleeping areas upstairs.

Two additional dwellings are built near to the original building. The complex was built gradually between 2010 and 2018, but all buildings use a similar language of heavy timber construction, with exposed structure and painted red accents. 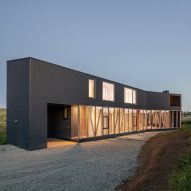 "Simple and austere, they experience the restlessness of the environment, so that not much else is needed to inhabit this place," said Acuña's project description.

The interiors feature generously glazed rooms, with views onto the water and surrounding inlets from every space. The structure's simple wooden details are left exposed throughout the project.

Other seaside homes in Chile include a glass-and-metal residence near the town of Puerto Montt by Ignacio Correa, and a project in Los Lagos by Equipo Cazu Zegers that draws from improvised tents set up by loggers in the area's forests.