Izquierdo Lehmann Arquitectos and Francisco Saul have completed a block of five row houses in Santiago, which are grouped under a large roof to give the impression of a single residence.

The San Crescente housing ensemble is named after its street in the Las Condes neighbourhood of the Chilean capital.

According to the architects, the land was purchased by a group of friends that wanted to develop a housing format different than the typical blocks available in Chile.

The long building is made of glue-laminated timber, a wood technology that makes long and sturdy members by glueing and compressing smaller wood elements.

This material forms the structure of each of the five houses that make up San Crescente, which are separated by concrete demising walls.

The Chilean pine structure forms a continuous pattern across the long facade of the building, lending the impression of a single volume rather than five separate units.

"The repetition of this module qualifies the facades with a constant rhythm that masks the differences of rooms and ownership within a unitary volume," said the architects.

"Like a large house for five families that opens onto the street as if they were one."

Within each unit, the architects did not build any walls on the ground floor. Instead, the communal areas are delineated by shelving, furniture, and millwork.

These form a "diffuse border" between uses, with the added benefit of opening up sight lines from the front of the homes all the way to the garden.

"The private courtyards and the street are visually connected across this framing structure," the architects explained.

On the upper level on each residence, a compact layout accommodates two smaller bedrooms facing the street, with a primary bedroom overlooking the garden. The main suite in each of the houses is slightly narrower than the full width of the property. 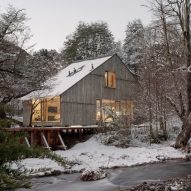 This arrangement enables the addition of a window to the centrally located bathrooms, and allowed Izquierdo Lehmann Arquitectos and Saul to include skylights in the living rooms below.

"These semi-detached houses, despite their limited perimeter to the outside, receive natural light from all four sides, like an isolated house," the architects explained.

The same pine wood as the structure was used for many of the building's interior finishes and furniture.

The entire building sits over a shared basement, providing parking and storage that is accessible from directly within the units.

Glue-laminated timber is part of a larger trend in the construction industry towards developing wood products that lend themselves to longer structural spans.

Other projects using similar technology include a dining hall in a west London school that is topped by a soaring wooden structure, and a timber building in Sweden with claims to be "carbon-negative" over its full life-cycle.