Foster + Partners has revealed its plans to add a large overhanging rooftop extension to the Bilbao Fine Arts Museum, as part of its renovation of the institution in northern Spain.

The addition to the building is intended to enhance the institution's "unique identity", and will contain a mix of gallery spaces and public viewing platforms.

It will form part of Foster + Partners' wider overhaul of the museum with local studio LMU Arkitektura, which will also see the restoration of several original elements of building that was built in 1945.

"We are delighted to have this opportunity to create a major new extension and remodel the Bilbao Fine Arts Museum," said Norman Foster, founder of Foster + Partners.

"Our design will restore the existing mid-twentieth century building and setting to its original glory, create a new publicly accessible atrium space and add major new galleries for contemporary art in a floating pavilion."

Foster + Partners and LMU Arkitektura's design is the winning bid in a competition that invited studios from around the world to "to write a new chapter in the life of the institution". 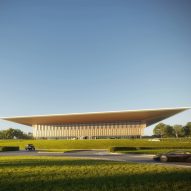 The proposal was selected from five other shortlisted entries by BIG, Snøhetta, SANAA, Nieto Sobejano Arquitectos and Rafael Moneo, and will mark museum's third major renovation, following an extension in 1970 and another in 2001 on which LMU Arkitektura also worked.

The overhaul of the Bilbao Fine Arts Museum was designed to restore its original facade and internal configuration and make the "1945 building the primary protagonist". The pavilion-like rooftop extension will provide 2,000-square-metres of flexible gallery spaces above it.

The extension, supported by slender columns, will rest on top of the 1945 brick building and its 1970 extension at the rear, overhanging the Plaza Arriaga that separates them.

This plaza will then be lined with glass to meet the overhang of the extension, forming a new enclosed lobby that will become the heart of the museum. It is hoped this will enhance the buildings permeability. 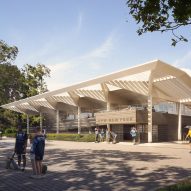 Once complete, the lobby will be lit by a giant cylindrical skylight that punctures the extension, which will also provide glimpses up into the new gallery spaces.

"We, with Luis María Uriarte, look forward to working with the director, Miguel Zugaza and his team to create a museum fit for this forward-looking city," concluded Foster.

Founded in 1967 by Norman Foster, Foster and Partners is an architecture studio headquartered in London with offices worldwide. The Bilbao Fine Arts Museum will be the practice's second project in the city, following Bilbao Metro completed in 1995.

Other recent proposals by the studio include a New York City boathouse featuring zigzag roof, an Uber Air Skyport for Santa Clara and The Tulip viewing tower for London, which was recently rejected by the capital's mayor.