Clad in corrugated metal, Pebble House would act as a self-contained residential extension, raised on a rounded platform that doubles as an exterior deck.

SO-IL designed the floor plan in the shape of a flower, with a sheltered glazed wall on the side of each petal. A central block would contain a bathroom, separating a bed area on one side and a kitchenette on the other.

Living spaces would occupy the open loop around the perimeter, spilling out onto the cloud-shaped deck.

Accessory Dwelling Units, or ADUs, are a scheme from the Los Angeles planning department to offer architect-designed granny flats for people to extend their homes with.

"Making them part of the blueprint of our efforts to tackle our housing crunch and create more affordable communities citywide."

ADUs can be up to 1, 200 square feet (112 square metres) and must contain their own bedroom, kitchen and bathroom facilities.

SO-IL's imagined client for Pebble House is a "free spirit" who wants to live in connection with the California landscape.

"Living in LA means living close to nature," SO-IL told Dezeen. "The presence of the environment is inescapable. This house, with its extended facade, maximises that relationship."

Pebble House's frame would be made from cold-formed steel with a floor and ceiling made of epoxy-coated wood.

"It's very easy to assemble, and is a system amenable to pre-fabrication as well," explained SO-IL. 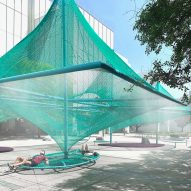 "The structural elements are readily available, but the pieces would be pre-fabricated on a case-by-case basis. Prefabrication can greatly reduce the amount of work that has to happen on-site."

The practice is currently working with engineers on the project and hopes to get Pebble House approved for the ADU scheme by April.

Designer Yves Behar has also created a range of ADUs for California, with a modular design and a flat roof, and prefabricated housing company Koto has an ADU that can be built in just two weeks.

SO-IL was founded by Florian Idenburg and Jing Liu and is based in Brooklyn. Previous urban living projects from the practice includes MINI Living – Breathe in Milan, a tiny home with breathable mesh walls.