London's V&A museum has acquired a series of objects from Extinction Rebellion, including flags, pamphlets and digital files, that show how the global activist group has used design to galvanise public opinion.

The items were acquired by the museum's Rapid Response Collecting programme, with several of the physical objects currently on display alongside the first 3D-printed gun, the flag of the Refugee Olympic Team and a Pussyhat from Washington Women's March on the third floor of the museum.

Alongside the physical items the V&A has also acquired a digital file of the group's Extinction symbol, while Extinction Rebellion's (XR) Art Group also gave the museum a digital copy of its website.

The items are intended to demonstrate that art and design are "key to Extinction Rebellion's demands for urgent action" and its efforts to influence public and political opinion on the dangers of climate change.

The donations include a printed pamphlet detailing the group's Declaration of Rebellion from the first print-run, and two printing blocks used to make protest flags and posters during a series of public workshops.

One is 3D-printed and shows the XR logotype, whilst the other is the group's symbol and is machine-cut from plywood. The symbol of a cross within a circle was designed by east London artist ESP in 2011 and adopted by the group last year.

Alongside these are green, pink and blue flags featuring the symbol and six screen-printed patches designed to be worn on the body during protests.

The final item is a child's high-visibility jacket to be worn during a protest. This item will be on display at the V&A's Museum of Childhood in east London for the next six months.

"Extinction Rebellion is pleased our work and practice can be seen for free at the V&A, a collection that includes works by William Morris and other design activists from the past," said Clive Russell from XR's Arts Group.

"All these designers addressed the issues of their times. The climate and ecological emergency is the issue of our time and art and design is crucial to our non-violent actions and communication," Russell continued.

"We call on all artists and designers to think beyond the bullying constraints of commercial drudgery and join us in rebellion."

The acquisitions are in line with XR's "coherent and impactful visual identity". They demonstrate four core design elements: the symbol, logotype, a palette of 12 bright colours influenced by Eduardo Paolozzi and the fonts FUCXED and Crimson. 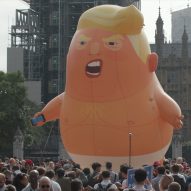 "The strong graphic impact of the Extinction Symbol alongside a clear set of design principles have ensured that their acts of rebellion are immediately recognisable," explained senior curator of design and digital at the V&A, Corinna Gardner, who acquires work for the Rapid Response Collecting programme.

"Punchy colours, woodblock prints, and carefully worded slogans available for download empower members of the public to produce their own creative responses that collectively amplify the XR's call to action."

Set up in 2014, the Rapid Response Collecting programme enables the acquisition and immediate display of design objects that address questions of social, political, technological and economic change.

"The objects we bring into the V&A through our Rapid Response Collecting programme are evidence of social, technological and economic change," said Gardner.

"Extinction Rebellion have galvanised public concern for the planet, and their design approach stands in relation to earlier protest movements such as the Suffragettes who encouraged the wearing of purple, green and white to visually communicate their cause."

XR is a global activist group demanding that governments declare a climate and ecological emergency, commit to a reduction of CO2 emissions to net zero by 2025 and create Citizen's Assemblies on climate justice.

Last month, the group refused to allow London's Design Museum to include its graphic design in its Designs of the Year show because of the museum's sponsorship by insurance group Beazley, citing the sponsor's "unacceptable behaviours".