American studio SERA Architects has overhauled a 115-year-old church building and created a contemporary addition to house a nonprofit theatre company in Oregon.

Since 2008, the Portland Playhouse has operated out of a once-vacant church in the city's King neighbourhood. In the early days, the group got by with sofa seating and other make-shift solutions.

In 2011, the city council decided that the church could not be used as a theatre, effectively halting performances there. Negotiations ensued, and the city eventually granted a special use permit for the building.

The performing arts group not only resumed operations, but also embarked on a project to improve the 6,500-square-foot (604-square-metre) facility.

"With a secure home in hand, the Playhouse undertook a plan to transform the outdated building into a fully dedicated theatre," said local studio SERA Architects, who worked on the project for a significantly reduced fee.

Working on a pro-bono basis, the architects collaborated with non-profit organisation to determine programmatic needs, aesthetic preferences and strategies for growth.

They came up with a scheme calling for an overhaul of the church building and construction of a small extension for rehearsals, community meetings and the fabrication of sets. The team also designed an outdoor component for a future phase.

The 1,500-square-foot (139-square-metre) addition gives the theatre company a contemporary face. A glazed wall defines the front elevation, providing views into an airy multipurpose room and engaging the building with the neighbourhood.

Sliding glass doors allow the interior to flow into an outdoor courtyard – a moment that helps "symbolically reinforce connections to the community".

Other facades are wrapped in larch wood that was charred using shou sugi ban, an ancient Japanese technique. The dark timber siding contrasts with the church's light-toned exterior. 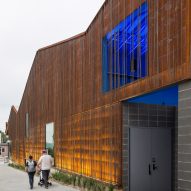 "The building creates a yin-yang dialogue between the white-painted church, while the bright interior volume serves as a welcoming environment for rehearsals and community meetings," the studio said.

Next to the addition is the church, which dates to 1904. Exterior walls were repainted, and the roof was replaced.

The public lobby was given a new ticket office, concession area and gender-neutral bathrooms. The theatre, which seats up to 90 people, was designed to be highly flexible.

"The primary performance space is designed as a black box theatre, enabling the artists to configure the stage and seating as desired," the team said. "The back half of the building includes a studio for set construction."

The building contains a basement, which formerly was dark and underutilised. It now houses dressing rooms, a green room, a kitchen, a lounge and office nooks. High windows, called relites, enable natural light to circulate through the subterranean space.

Other performing arts venues in the US include a Nebraska theatre by Min | Day clad in weathering steel and rebar, and an Illinois building by Studio Gang that consists of an elevated, glazed box wrapped in cedar bands. In New York, Diller Scofidio + Renfro and Rockwell Group recently completed The Shed, a cultural venue with a U-shaped, retractable roof.

Photography is by Pete Eckert.