The materiality of Seoul's architecture informed the interiors of this Blue Bottle Coffee cafe, which Schemata Architects has completed with steel surfaces and red-brick fixtures.

This is the first Blue Bottle Coffee cafe to appear in South Korea, but Schemata Architects has already designed several of the brand's Tokyo branches.

Among them is one in the city's Roppongi area that's almost entirely lined in basswood, and another in the Kiyosumi-Shirakawa locale that's topped by a plant-filled atrium.

In the new three-floor Seongsu location, each level is dedicated to a different use. The cafe has been designated to the basement – a decision made by the practice after seeing that the ground floor overlooked a busy road often blocked with traffic.

"Having the cafe in the basement provides a calm and peaceful space away from the bustle on the ground," it explained.

At its centre is a huge stainless-steel service counter, above which a section of the ceiling has been cut away to provide views to the upper floor.

Large stacks of red bricks – a material typically used to clad the facades of buildings in Seongsu – have been dotted throughout the space, where brand merchandise like packets of coffee and mugs can be displayed. 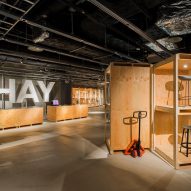 "As a mark of respect for [Seongsu's] history, we decided to also use brick inside the building," explained the practice.

A short set of stairs leads down to a lowered seating area that's dressed with timber tables and chairs, as well as a couple of long beige sofas.

The ground level plays host to a roastery, a storage room for coffee beans and an area dedicated to cupping: the practice of observing the taste and aroma of brewed coffee.

This whole floor is fronted by glass, allowing passersby on the street a glimpse at the brand's coffee-making process.

Upstairs on the second floor are offices for staff.

While a majority of surfaces in the cafe are exposed concrete, a number of elements like the staircase balustrade, doorways and structural columns have been crafted from or clad in stainless steel to match the service counter on the basement.

"The basic design rules for Blue Bottle Coffee cafes remained the same in this project, which is to utilize a limited number of materials to create a space with a sense of unity and to create a flat relationship between the customers and the staff over the counter," the practice's founder, Jo Nagasaka, told Dezeen.

Blue Bottle Coffee was originally founded in 2002 in California. It isn't the only caffeine brand to opt for having pared-back cafes – % Arabica opened a branch in Hong Kong's Star Ferry terminal which features concrete surfaces and simple white high-tables where customers can stand and enjoy their drinks.