A lush green wall and back-lit fibreglass panels are found on the exterior of an electrical substation extension that was designed by TEF Design to achieve net-zero energy consumption.

Owned by the utility company Pacific Gas and Electric, the Larkin Street Substation Expansion is located on a mid-block site in the city's Tenderloin neighbourhood. It adjoins a concrete structure built in 1962 to supply power to the northeastern part of San Francisco.

"The constrained property and need to accommodate crane and equipment lift access prescribed the expansion's perpendicular orientation to the existing substation," the firm said.

The building has a steel frame and concrete walls. A fine-grained, metal-mesh screen marks the point where the new building meets the old.

Street-facing walls are wrapped in three types of glass-fibre-reinforced-polymer (GFRP) panels: sloped, perforated and ribbed. The different styles form a faceted surface that belies the "modest materiality" of GFRP. 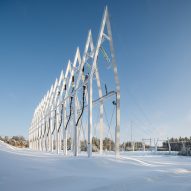 "Each panel is individually crafted and unique, with ribs that cast linear shadow patterns in sunlight, creating an ever-changing surface throughout the day and year," the studio said.

The sloped ones are embedded with lighting fixtures that pulsate at night, "expressing the city's dynamic electrical power grid", the team added.

On the western elevation, the team created a green wall, with plants arranged in a geometric pattern that echoes the faceted panels. The greenery adds a welcome touch of biophilia to the urban block, the team said.

Inside the building – which houses electrical switchgear – there are ceiling heights of 25 feet (7.6 metres). Interior photos are not allowed due to security concerns.

According to the architects, the substation is the first of its kind in the US to aim for net-zero energy consumption. TEF Design worked with the Seattle-based International Living Futures Institute to establish a rating system for electrical substations.

Power is supplied by a 60-kilowatt array of solar panels. The team also incorporated elements to help reduce energy consumption that was informed by a rigorous research process. 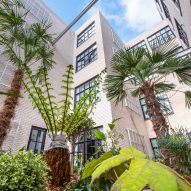 "Large vents at the base of the building exploit the city's cool temperatures through natural ventilation that helps eliminate the need for artificial cooling and reduce the building's energy load by nearly 40 per cent," the team said.

"Inside, supplemental fans, triggered only at high temperatures, help to cool the building only when needed."

Other energy-related projects include a London energy hub that is wrapped in anodised aluminium, and an electricity substation in Finland that features a screen made of handmade bricks laid in a zigzag pattern.

The photography is by Mikiko Kikuyama.