Staff don't have designated desks inside the offices of luxury department store Selfridges, which Alex Cochrane Architects has completed with open-plan workrooms and communal seating.

The office accommodates Selfridges' executive, buying and merchandising teams and has been designed by Alex Cochrane Architects so that staff are "discouraged from owning any given space".

Once dominated by closed-off cubicles, the office's new, open layout is meant to encourage better communication and collaborative work amongst employees.

"Prior to the redesign, the offices were a very much no-frills, function-led space," Selfridges' buying and merchandising director, Sebastian Manes, told Dezeen.

"Although the space had seen several cosmetic updates over time, it was in need of a full strategic, structural and aesthetic rethink. The needs and behaviours of the buying and merchandising teams had changed and the space was no longer adequate," Manes added.

"The new offices are fully responding to the very nature of the life of a buyer who is by definition always on the move, travelling around the world more than half of the year, looking for exciting new products."

The office's main room has been transformed into a single open-plan space. A series of long timber desks run down its centre, where employees can work individually or huddle as groups. 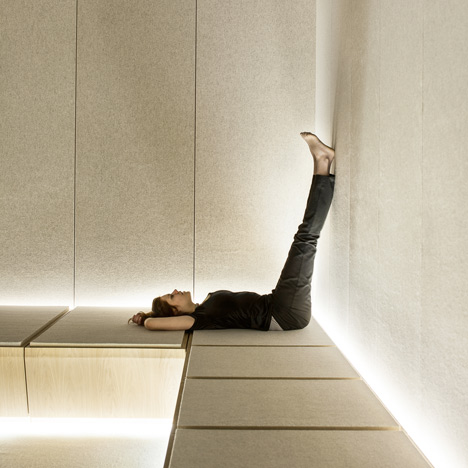 The Silence Room at Selfridges by Alex Cochrane Architects

Each of the desks has been loosely delineated to particular departments of the buying and merchandise teams, like menswear, womenswear, and beauty. This is signified by different-colour cubbyholes which have been placed on the countertops.

Benches, brightly-hued stool seats and square tables have been placed at the room's peripheries, offering more spots for employees to perch and work.

"We were set on creating a functional space that broke away from anything that encourages repetitive and rigid working patterns usually seen in traditional office design formats," explained the practice's founder, Alex Cochrane.

"The result is an office that feels totally open, flexible and homely whilst fostering a highly effective professional output."

Workrooms on the executive side of the office have been designed to have a slightly residential feel and have thus been largely upholstered with cosy grey fabric.

Should staff want a quiet space to focus on work, there are a handful of meeting booths with cobalt-blue walls and high-backed seating pods crafted from steel.

Employees can then relax in the office breakout room, where sunshine-yellow cabinetry offsets a jet-black breakfast island and communal dining table, or in the "playroom" which is centred by a table tennis set.

There is also an outdoor terrace that's dressed with a bright-red Spun chair by designer Thomas Heatherwick, which is made to resemble a spinning top.

Extra splashes of colour are provided by the service ducts on the ceiling that have been covered up with green and magenta-pink metal boxes.

Alex Cochrane Architects is based in west London's Earls Court and was established in 2009.

This isn't the first time that the practice has worked with Selfridges – back in 2013, it added a "silence room" within the department store where shoppers could escape for a moment's peace.

In 2012 it also redesigned the men's clothing department by creating a geometric sculpture across the ceiling.