Brazilian studio Atelier Branco has completed a glass house among a rainforest in São Paulo with a rooftop terrace for the resident "to read and smoke a cigar looking at the stars".

The local architecture practice designed Casa Bibilioteca, which translates as Library House, in São Paulo's Vinhedo municipality. It was created for a philosopher, who wanted a private space to read and think.

"It is a little Library House for a 75-year-old philosopher, whose dream was to read and smoke a cigar looking at the stars from the top of the trees," said Atelier Branco.

Located on a sloped site in the Atlantic Rainforest – a forest that runs along the Atlantic coast South America – it features a thick concrete roof that forms the base of a large terrace.

Wooden boards are laid in diagonal patterns to mark the deck, with a pool of water running around the perimeter.

"We managed to create a 200-square-metre terrace to enjoy nature in the middle of the Atlantic Rainforest," said the studio.

In-situ concrete that was cast in a single working day forms the main structure of the house, including the roof, the stepped foundation and columns. Concrete steps also flank either side of the property to lead up to the rooftop.

Huge glass walls with slender steel frames span between the roof and the base to provide forest vistas from inside the house.

Casa Bibilioteca is arranged over the three levels that step down the site. The concrete structure is left exposed and complemented by wooden flooring throughout to create continuity between the different areas.

An open-plan kitchen, living and dining room is located on the bottom level, with a glass door on the front wall that opens outside.

The middle floor forms a reading area and study with a large bookshelf running along the back wall. Doors placed in the glass walls on either side lead onto the exterior steps. 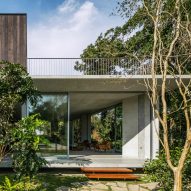 Casa Bibilioteca, which was completed in 2016, forms part of a boom of architecturally adventurous Brazilian residences.

Recent examples include a house by Studio Arthur Casas topped with a putting green and Laurent Troost Architects' residence in the Amazon forest featuring a folded weathered steel roof.

Photography is by Ricardo Bassetti Kaz, unless stated otherwise. Photograph featured in video is by Gleeson Paulino.