Researchers have developed an algorithm to match refugees arriving in the US with the city where they are most likely to find employment and a good quality of life.

Developed by researchers at Worcester Polytechnic Institute in Massachusetts, Lund University in Sweden, and the University of Oxford in the UK, the algorithm aims to direct new arrivals to the US to the places where they are likely to have the best chance of success.

Placing refugees using Annie MOORE (Matching and Outcome Optimisation for Refugee Empowerment) can significantly improve people's chances of finding work within three months by more than 20 per cent, the group of researchers found.

"Refugee resettlement is a complex humanitarian problem that cannot be solved with a single quick-fix," said lead researcher and professor of economics at Oxford University, Alex Teytelboym.

"The manual resettlement process was riddled with issues, not least the sheer volume of cases that are processed each week – we are talking hundreds," he continued.

"This does not give the organisations enough time to thoroughly think about where and why they place a refugee family."

The software uses a matching algorithm that was developed using machine learning to recommend suitable places, based on a number of variables including their health, age, education levels and the languages they speak.

It bases these decisions on large volumes of data from previous placements, showing where refugees have been able to find employment and housing. The final decisions are made by experienced agency staff. 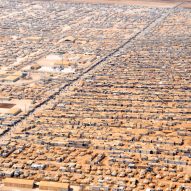 "Don't design yet another shelter" for refugees, say experts

"The software takes on the bulk of the work of figuring out straightforward placements while drastically improving refugee outcomes," said Teytelboym.

"This fast-track approach means that the resettlement staff can then focus more time on supporting refugees with issues such as mental health, long-term conditions, and previous trauma, for whom it is often harder to find good placements."

Developed with US refugee-assistance non-profit organisation HIAS – which has been trialling the system since May 2018 – Annie MOORE gives an individual score for each displaced person to each city where the organisation has an office.

The highest scoring cities are those where the person is likely to be best suited.

Previously the decisions have tended to be made based on capacity, but it is thought that the refugee-centred approach could have better outcomes – although currently employment and housing opportunities are ranked above the refugee's own preferences.

The algorithm is also able to arrive at a result six times quicker than a human, whilst taking a vast number of points into account.

The software is named after Annie Moore, an Irishwoman who was the first person to pass through Ellis Island, the primary immigration station in New York until 1954.

Technology can be replicated elsewhere

The group of researchers are using the US project as an experiment. In 2018, the US accepted 22,491 refugees and of these, only a small proportion were placed using Annie MOORE.

The fewer data points the researchers have, the harder it is for the system to be effective. As more refugees are placed using the system it will become more effective.

"President Trump has accepted the lowest number of refugees for many years. Given there are 17 million refugees worldwide and over a million that require resettlement, this is a tragic situation," said Teytelboym.

"Nevertheless, we are ready to support any agency in the US or any country, such as the UK with its Syrian vulnerable persons resettlement scheme, in improving their resettlement processes."

The team hope that it might be rolled out to other countries that take in large numbers of refugees. For example, the Swedish government has expressed an interest in using the technology.

Speakers at the Good Design for a Bad World talk during Dutch Design Week suggested that designers should stop focusing on gimmicky "micro-solutions" such as clothing, shelters and apps that offer purely superficial solutions to the very real problems that refugees face.