Developed as part of a new exhibition at London's Design Museum titled Get Onboard: Reduce. Reuse. Rethink, PriestmanGoode has redesigned various elements of the on-board cabin service in a bid to reduce the amount of plastic waste produced.

"We all travel, whether for work or for leisure - it's an integral part of our lives," explained Jo Rowan, associate strategy director at PriestmanGoode.

"But what we don't realise is the waste we, as individuals, create in that process."

The studio found that an average of 500 grams of single-use plastic waste is produced per person on every long-haul flight.

This amounts to an estimated 5.7 million tonnes of cabin waste on global passenger flights each year, from earphones and eye-masks to toiletries and food waste.

The starting point of the project and exhibition was to rethink the meal service given on flights.

In a bid to reduce weight and eliminate plastic waste, the studio replaced the materials used to make the meal tray and its various components with other edible and commercially compostable materials.

The tray itself has been made from coffee grounds and husks mixed with a lignin binder, and the base containers that fit into the tray have been made from wheat bran.

Coconut wood has been used to make the spork – a spoon and a fork combined into one design – while the cup is composed of rice husk mixed with polylactic acid binder, with a cup liner made from algae.

Instead of the small plastic pots used to contain sauces and milk, PriestmanGoode has designed capsules made from soluble seaweed, much like the edible drink pods handed out to runners at the London Marathon this year.

"Elements that are currently rotable (washed and reused), like the tray itself, would continue to be so, and elements that are discarded, like single-use plastic, would be replaced with a sustainable alternative," she added.

Some materials were also chosen to reflect the contents of the food inside – for instance, the designers used algae or banana leaf to make a lid for the side salads, and a wafer for the dessert lid.

All waste items can be kept inside the main meal lid, which closes down into a compostable pack for more efficient disposal.

"We want to revisit the provision of services so that passengers can keep getting what they expect from a great travel experience, but at a lower environmental cost," said Rowan.

PriestmanGoode's decision to eliminate throwaway plastic was prompted by the recent legislation passed by the UK government in March 2019 to ban single-use plastic products such as plastic plates, cutlery, food containers and expanded polystyrene cups by 2021.

While the focus of the exhibition is on air travel, the ideas can be applied across the whole industry.

The studio also hopes that the exhibition will encourage passengers to change their consumer behaviour when flying, by showing visitors the impact of collective waste. 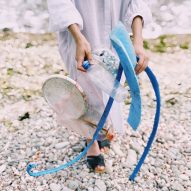 For example, according to Heathrow Airport, if passengers at the departures lounges refilled their bottles from water fountains instead of buying plastic bottles, the airport could reduce its plastic bottle consumption by 35 million a year.

The studio channelled this idea into a refillable water bottle made from cork and a commercially compostable bioplastic material.

The bottle has been designed for repeated but short-term use – about the length of a holiday – in a bid to address "impulse buys" by travellers at airports and train stations.

It's square shape makes it efficient for travel, fitting snugly into the pocket on the back of each seat on the aircraft as well as making it easier to pack, ship and store.

In addition to a physical bottle, PriestmanGoode has created a concept for a water-cooler cart onboard the aircraft, which would allow passengers to refill during their flight.

This concept also sees an accompanying water-cooler system installed in the galley areas of the airplane. As well as providing a water supple, this would incentivise passengers to get up and walk around during long-haul flights to increase blood flow.

A series of animations in the exhibition explore different elements of the onboard service, including sleep accessories, entertainment devices and travel toiletries, and ask viewers to consider whether they really need what is on offer to them.

In PriestmanGoode's concept, passengers would be able to pick and choose what they need prior to their flight from a list of items made from and packaged with sustainable materials .

Passengers could alternatively choose to use their own toothbrushes and travel-sized toiletries instead of requiring the production of new items.

A reward scheme could also be put in place for those who opt for the more eco-friendly and waste-free options.

"We don't want to take anything away from passengers, but a lot of doubling up on things people generally travel with, means we end up with vast amounts of waste in landfill," explained Rowan.

"We also know that service items are an important touchpoint for airlines, and a way they can differentiate themselves from their competition," she continued.

Get Onboard: Reduce. Reuse. Rethink runs at the Design Museum in London, until 9 February 2020.