Mono Architekten has restored and extended a 1970s concrete school block in Germany with a cluster of curving larch-clad volumes topped with sloping green roofs.

The extension houses an after-school care centre for the Waldorf School Berlin-Prenzlauer Berg, which has also had a makeover from the Berlin-based practice.

This centre is the first phase of a wider project won by Mono Architekten in 2015 following an invited competition, which will also add a new hall and a senior's building to the opposite side of the existing building.

Designed to be a stark contrast to the school's 1970s architecture, the new structures directly link with the existing building.

The school sits surrounded by trees, and large, strategically placed openings in the new centre have been placed to frame views to the outside.

Between the bends of the loosely S-shaped building, pockets of space have been used to create terraces. The extension's shape creates interesting outdoor areas for the children to play in.

Mono Architekten  used as many natural and renewable materials as possible for the centre. The building has a timber frame and its walls are built from straw and clay plaster.

Arranged around a winding corridor, the centre connects to the original building below the canteen, at the western end of the school building.

A set of steps here will also connect to the new hall building, once it is complete.

Thick clay-plaster walls line the corridor, loosely splitting the building into two halves. Rooms for different school groups are on either side, as well as storage areas and a cloak room. 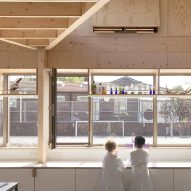 An alternative entrance directly into the centre sits tucked-in to the building's northern edge.

The design of the school was intended to mirror the ideals of Waldorf-Steiner schools, which focus on the creativity and imagination of pupils, minimising testing and exams.

MONO Architekten was founded by Daniel Schilp, André Schmidt and Jonas Greubel in 2013.

Many designers have been similarly inspired by this educational approach when designing schools, such as at the recently completed El Tiller Kindergarten near Barcelona by Eduard Balcells, Ignasi Rius and Daniel Tigges.

Photography is by Gregor Schmidt.