Dezeen promotion: a selection of artworks featured in magazines Vogue, The New Yorker and Vanity Fair has been made available to purchase as prints by Fine Art America.

The three Fine Art America collections transform hundreds of photos and drawings created for the magazines into ready-to-hang prints and canvases with a range of framing options.

Titled the Condé Nast Art Collections, the range comprises 136 different collections and thousands of prints made from art featured across the company's various magazines – including Vogue, The New Yorker and Vanity Fair.

Among the artwork featured in the Vogue series are photos by American fashion photographer Clifford Coffin, including his 1949 image called Models Sitting On Sand Dunes.

The portfolio of American-Russian fashion photographer George Hoyningen-Huene also features, with black and white images like The Divers Date taken in 1930.

Bob Staake's abstract portrait of Ruth Bader Ginsburg's lace collar for The New Yorker's October 2020 edition is among the cover art featured in the series, alongside Abigail Gray's reinvention of the wartime icon Rosie the Riveter for the Women's March in 2017.

Cover art also features in the Vanity Fair series, including copies of illustrated issues produced in the early 20th century.

The artwork from the Vogue, The New Yorker and Vanity Fair series can be purchased from Fine Art America as canvas prints, metal prints, acrylic prints, wood prints or posters.

They are also available with several mounting options including seven different colour frames, which allow users to tailor their artwork to the interior of a room in which it will be used. 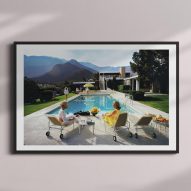 Alongside making the works of leading photographers and brands accessible to purchase, the marketplace also exists to help emerging artists sell art, home decor and apparel.

To see more of the company's Vogue, The New Yorker and Vanity Fair series or explore the Condé Nast Art Collections in full, click here.

This article was written by Dezeen for Fine Art America as part of a partnership. Find out more about Dezeen partnership content here.