Rogers Stirk Harbour + Partners has completed Centre Building, the tallest and largest department at the London School of Economics and Political Science.

As its name suggests, the 13-storey structure is positioned at the centre of the London School of Economics and Political Science's (LSE) campus in Bloomsbury, London.

It is designed by Rogers Stirk Harbour + Partners to provide the university with flexible spaces for the its range of departments, while also being a focal point alongside a new public square at the heart of the campus.

"The Centre Building project presented us with a unique opportunity to work with the LSE to design a building which really reflects the values of the school," said the studio's partner Tracy Meller.

"Our proposals went beyond the original brief aspirations placing a new public square at the heart of the campus to improve wayfinding and connectivity, and to give the LSE a much needed new focal point."

The Rogers Stirk Harbour + Partners tower replaces several existing buildings on the site and at 13 storeys it is the largest building to have been commissioned by the university.

The massing of Centre Building comprises two volumes that are joined by circulation and meeting spaces. These are slightly staggered so each opens out to the public square.

Like the studio's signature high-tech architecture, the building is characterised by the expression of its structure both internally and externally to "give the building a distinct appearance". This includes cross-bracing, steel beams and columns, concrete cores and precast concrete floor slabs. 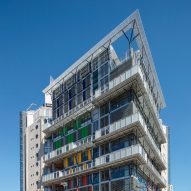 Inside this is complemented by a "warm" material palette of oak and birch plywood.

The lower levels of Centre Building are occupied by public and highly serviced facilities, including the restaurant, auditorium and large lecture theatres.

This placement is designed to form a continuation of the public square and facilitate "natural interaction with the public realm".

Above, the first and second floors are host to general teaching facilities and a large external terraced garden.

These are connected by a large atrium with staircases that creating a playful circulation route between them. The atrium also assists facilitates ventilation of internal deep plan areas.

The remaining upper levels of the building are filled with a number of academic departments, three roof terraces and a cafe that offer students and staff new and improved places to socialise.

Each department is designed with simple flexible floor plans that can be adapted to meet their differing requirements.

Rogers Stirk Harbour + Partners sought to create a dialogue between these departments visually and physically by a broad staircase, which is framed by large glass panels that zigzag up the building's facade.

This facade is also adorned with brise soleil, which have been developed to maximise daylight into building and also gives the building two different appearances when viewed from the north side and south.

Rogers Stirk Harbour + Partners is an architecture practice based in London, which was founded by Richard Rogers in 1977.

Other recent projects by the studio include the proposal for a spy museum in Washington DC, the Hong Kong bridge immigration building and the Three World Trade Center in New York City.

Photography is by Joas Souza unless stated.